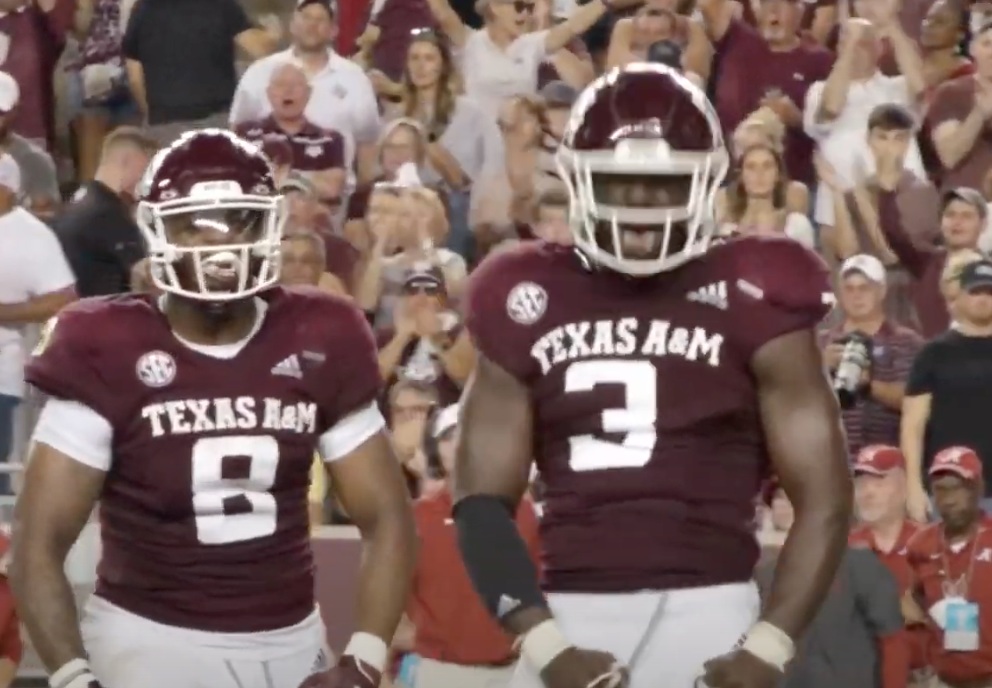 — Has decent size and play strength for the position
— Does a good job playing with leverage in terms of having hip and knee bend when fighting blocks
— Shows instances of power in his hands when shedding blockers or on his bull rush
— Has the burst to get off the line quickly at the snap of the football to put blockers in a bind
— Will use get off to leverage counter move inside if he can’t win around the corner as a rusher
— Will fight blocks to push the pocket but also has a fair amount of bend and flexibility to get the edge or dip back inside
— Will use blockers’ forward lean against them if they lunge forward, hitting the push/pull to shed the block
— Does a good job of keeping outside leg and arm free for contain responsibilities as well as to fight through the tackle’s outside shoulder as a rusher
— Can dip/rip to get around the corner on his rush
— Good at shooting gaps inside and working across face of blockers to make plays against the run
— Effort rusher that will win on extended plays, continually working to get to the QB
— Has shown a capability to drop into coverage and run up the seam with receivers on occasion

— Lacks ideal height, length, and weight for the position at the next level
— Get neutralized by size and pure strength as a pass rusher and pushed off the LOS as a run defender
— Can occasionally win with the bull rush, but struggles to knock back tackles that can land their punch on him and anchor in
— Has a tough time keeping blockers’ hands off his frame and getting off blocks once engaged, neutralizing the rush
— Isn’t the best athlete when it comes to working laterally down the LOS as well as adjusting in zone coverage over the middle of the field/in the flat
— Motor runs hot-and-cold in terms of pursuit of the football against the run
— Backside pursuit can result in him taking plays off on occasion
— Noticeably gets gassed on extended drives/two minute, resulting in poor get off and lack of urgency to hunt the QB
— Resorts to a straight bull rush rather than utilizing other pass rush moves or counters
— Will get fooled by receivers in coverage that make breaks at the top of their routes

— Redshirt Senior prospect from Washington, D.C.
— Rated a three-star recruit by most recruiting services and the #1 DE recruit in D.C.
— Redshirted his first season on campus in 2017
— Made the SEC All-Freshman Team in 2018, playing in all 13 games as a reserve where he recorded 14 tackles, two TFLs, 1.5 sacks, and a forced fumble
— Saw his play time and role increase as a sophomore where he posted 32 tackles, 6.5 for loss with four sacks in 12 games (10 starts)
— Continued to provide a steady presence along the Aggie defensive front in a pandemic-shortened 2020 season where he played in ten games and stated five, ending the year with 23 tackles, six for loss, and four sacks
— Enjoyed a statical breakout season in 2021 where he recorded 31 total stops, nine TFLs and 8.5 sacks in 12 games with nine starts
— Missed out on playing in the TaxSlayer Gator Bowl, however, due to COVID-19 issues on the team
— Suffered a minor quad injury while running he 40 at his Pro Day, keeping him from finishing the run
— 2021 AP All-SEC Second Team (2021), SEC All-Freshman Team (2018)

Tyree Johnson from Texas A&M is the latest Aggie finding his way from College Station to Pittsburgh, PA. The nearly 6’3, 241lb pass rusher was signed by the Steelers immediately following the 2022 NFL Draft as a UDFA, joining his teammate DeMarvin Leal and another former teammate Buddy Johnson on the defensive side of the football. Johnson is a slightly undersized EDGE rusher that specializes at hunting the QB. Being the #1 DE recruit out of Washington D.C. back in 2017, Johnson’s role on the defense increased every season, leading to a breakout 2021 campaign that resulted in him posting nine TFLs and 8.5 sacks.

When you watch Johnson on tape, you see a player that does a pretty good job getting after the quarterback. He has decent size as well as the bend and flexibility to challenge around the corner on the edge, being able to flatten into the pocket and put pressure on the passer. Check out this sack Johnson gets coming off the edge as he works through the block of #4 Brian Robinson, working through his outside shoulder as LT #73 Evan Neal fails to pick him up on the snap, resulting in a sack.

Johnson rushes the passer with notable effort and speed, possessing good burst on the snap. He does a good job when initially stopped by continually working to fight around blocks, resulting in effort pressures and sacks like we see on this rep against Auburn where Johnson initially gets up field and challenges the outside shoulder of the LT and gradually works through the block, ripping off at the last second to swarm #10 Bo Nix and take him down.

Here is another example against the Tigers where Johnson challenges the outside edge with good burst off the snap, sticking a long arm into RT #76 Austin Deculus, but then spins as he recognizes the wide hole on the inside to counter back into the pocket and get on the sack with teammate DeMarvin Leal.

While not incredibly versed in terms of having a variety of pass rush moves, Johnson flashes moments where he can string together a combo as a pass rusher to defeat blocks and get into the pocket after the QB. Here against Alabama, we watch Johnson take advantage on newly signed Steelers OL #79 Chris Owens who gets caught leaning forward and ducking his head uses the chop/rip move to easily clear the block and chase down #9 Bryce Young who attempts to scramble up the pocket, taking him down for the sack.

Despite being an undersized EDGE defender, Johnson tends to rely on converting speed to power often as a pass rusher and mostly relies on the bull rush in attempt to push the pocket and knock back pass protectors. His get off and violent hands aid in his execution of this technique as you can see here against Oklahoma State, playing with good leverage as he gets up and underneath the LT, having his hands inside his shoulder pads as he proceeds to walk the blocker back into the QB and uses the tackle to bring down the QB as he puts the tackle flat on his back.

Still, while Johnson can use power as a rusher, he needs to be more consistent with his effort and not allow blockers to get on his frame so easily once engaged. His short arms and limited length will allow blockers to get on him often, thus having the ability to lock him out and keep him from getting a push. His lack of size also doesn’t help matters as you see on this run play against LSU where the TE picks up Johnson and stalemates him at the LOS, starting to push him back until the back comes through the hole and Johnson falls off the block in attempt to ankle tackler the runner.

Don’t get me wrong, there are moments where Johnson can be a solid run defender, playing with good position to keep outside leg and arm free to keep contain and shows good pursuit of the football. Take, for example, this tackle Johnson makes against the Tar Heels where he gets into the TE on the snap of the ball and keeps the outside contain as he looks to see where the back is. He is a tad slow to shed the block, but still manages to chase down the back from behind and get in on the tackle.

However, Johnson’s effort as a run defender can be quite hit-or-miss as he needs to play with more urgency to shed blocks and be more disruptive. You also see a similar sense of an uneven motor as a pass rusher, especially when he gets tired near the end of the game. His burst off the snap wanes and he will mail it in, running straight into the blocker with no real pass rush plan.

We saw plenty of this in the final drive against LSU where Johnson was slow off the ball and didn’t provide much of a rush in consecutive plays as the Tigers drove down the field to score. This specific pass falls incomplete, but Johnson needs to play with more urgency in the most critical moments of the game.

When it comes to coverage with Johnson, it is a mixed bag. In the clip below, you will see Johnson pick up the slot receiver running up the seam and carry him vertically which is a great sign for a projected outside linebacker. However, his feet are pretty slow when it comes to lateral change of direction, resulting in him not being able to stay with receivers and tight ends as the break out of the top of their routes. He should be capable of dropping to the flats or occasionally carry receivers vertical, but his best work will be going forward rather than dropping back or moving side-to-side in space.

Overall, the production and flashes on tape make Johnson an intriguing add as likely a player that warranted draft consideration late on Day Three, but the quad injury suffered while running the Pro Day prevented teams from getting a full athletic background profile on him. Along with this the lack of size and ideal length could hurt his chances of being an effective rusher at the next level as well as notable effort issues in run defense and consistency rushing the passer. If I had to best guess, Johnson’s best chance is to bulk up a little and improve his run defense while proving himself on special teams and as a situational pass rusher to make the squad as a UDFA.

When watching Johnson, I saw some similarities between he and Samson Ebukam who signed with the 49ers last offseason. Ebukam is a tad more explosive in terms of speed and acceleration as well as is a more consistent run defender, but both players have nearly identical builds (6’2, 245lb, 32 1/2” arm, 9 5/8” hand) along with similar pass rush styles as guys that win with effort and speed rather than nuanced technicians. Ebukam was a fourth-round selection coming out of Eastern Washington and cemented himself on the Rams as a core special teamer as well as a reliable situational pass rusher in a rotational role.

I can see Johnson’s track of making the roster for the Steelers following a similar trend as he works to win the OLB4 job behind T.J. Watt, Alex Highsmith, and Genard Avery. Pittsburgh will likely add another OLB to the roster this offseason, making Johnson’s chances of making the roster that more difficult, but should he continue to work on his body and improve as a run defender, there is no reason to suggest that he can’t make the practice squad and take a redshirt year to improve with an outside chance of being the fifth OLB Pittsburgh carries into the regular season.