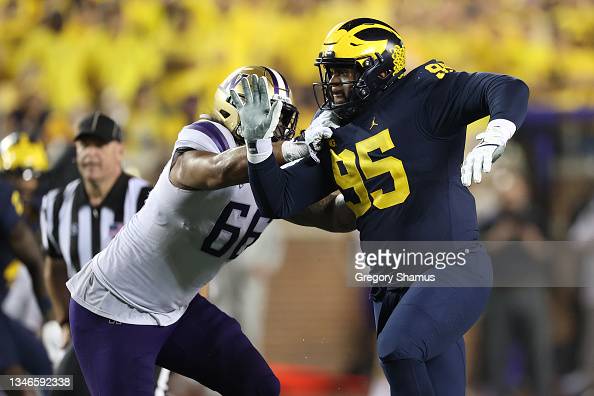 A grad student from Michigan and western Pennsylvanian comes to Pittsburgh with good size, length and very good hands size. He was rotational defensive lineman for the Wolverines and lined up from the 0 technique over the center out to the 5 technique.

Against the pass, he displays solid snap quickness and has a good punch with his hands. He is limited with his pass rush plan and will occasionally use a chop/rip but the majority of the time it’s a shimmy, punch and getting his hands up in the passing lane. He has solid acceleration with an open lane and has a solid motor to chase the quarterback out of the pocket. On screen plays he displays solid awareness to read and chase to the outside.

At Wisconsin, Jeter (95) is against the right guard and this is his go to move. The shimmy, punch and gets his hand up.

At Penn State, facing the left guard he contains the pocket and will make the tackle on the quarterback trying to escape.

Against the run, he has good hand placement and play strength to stack the offensive lineman when playing in a two gap scheme. He can hold his ground one-on-one having the play strength to press his blocker and is good at clogging lanes. Against double team blocks, he has a solid anchor when he uses good technique. On short yardage/goal line situations he would move to the 5 technique.

At Wisconsin, in a short yardage situation and they try to block him with the fullback (44) and he tosses him aside to get in on the tackle.

At Michigan State, against the left guard he will stack, peek and get off to make the tackle.

Vs Ohio State, he will get inside the left guard and make the tackle for a loss.

Vs Georgia, another example of a stack and shed against the right guard for the tackle.

Rushing the passer he has poor up field burst, standing up before moving forward. His hand usage and pass rush plan is very limited. Unless his assignment was to contain the rush all the time he was virtually ineffective on passing plays. Diagnosing and transitioning from run to pass is slow.

Against the run, he has a lot of forward lean and could be put on the ground with one chop. His timing to shed blocks at the point of attack is adequate and needs to be sped up. As a one gap defender he lacks the quickness to shoot gaps and be disruptive. When engaged with a blocker he loses sight of the ball and must follow the mesh point better. His athleticism is limited and he won’t make a lot of plays outside of the tackles.

At Wisconsin, he’ll shift from the 3 tech to the 1 tech and gets twisted and pushed back against the double team block.

At Michigan State, as the 1 tech his eyes follow the puller and he turns right while the run goes behind him.

At Ohio State, he will take on the center and can’t disengage quickly enough to get make the tackle

Overall, Jeter has good size and length and has played from the 0 technique to the 5 technique as a rotational defensive lineman on the college level. His go to move is to shimmy, punch and get his hand up as a pass rusher but has shown a chop/rip. Against the run, he is best as a two gap defender using his hand placement and play strength to stand up blocker and make plays within his gaps.

Areas to improve include his up field burst, hand usage and pass rush plan when getting after the passer. His mental processing needs to quicken when diagnosing from run to pass and he must keep his eye on the ball at the mesh point. He also needs to shed blocks faster and is not a good fit for a one gap scheme.

In a crowded defensive line room Jeter has his hands full to attempt to wrestle away a practice squad spot from one of the veteran defenders. Best case scenario for him would be to earn a spot but more likely he’ll be a name on the “if-we-need-you” list they can call if they have injuries to the position.

Games Watched: 2021: At Wisconsin, At Michigan State, At Penn State, Vs Ohio State, Vs Georgia