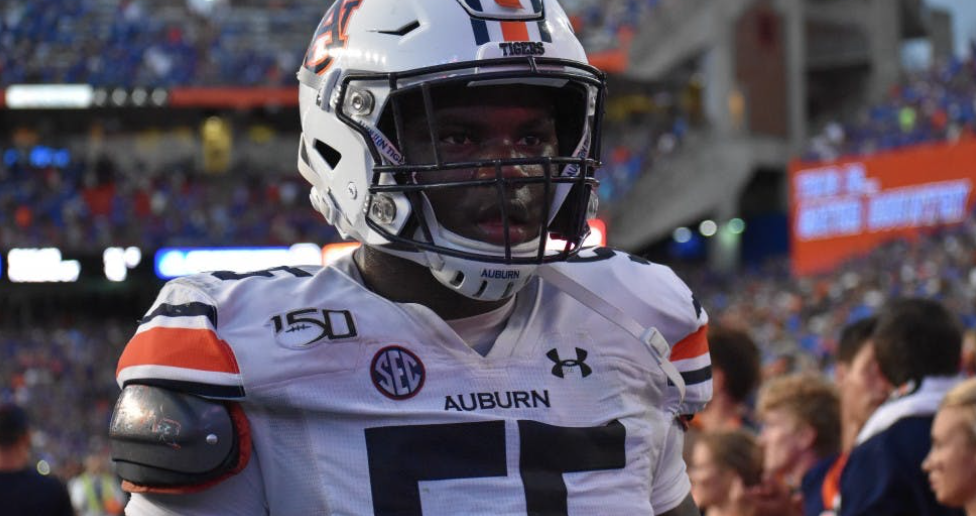 — Lacks ideal height, length, and frame of the EDGE position
— Short arms and stocky frame allow blockers to get hands on his chest and latch on to neutralize his rush
— Shows some ability to hand fight, but mostly is neutralized once blocker has his hands on him
— Has poor balance and ends up on the ground far too often
— Plays too high and upright despite stocky frame
— Doesn’t possess much bend around the corner
— Explosive testing is poor and ability to push the pocket is limited
— Lack of length and play strength to dictate blocks shows up in his inconsistencies in stacking and shedding blocks
— Will run straight up the field, taking himself completely out of the play at times
— Needs to play with better awareness and instincts as he will constantly stop his movement to locate the football instead of continuing his pursuit
— Fights hard to maintain his spot against the run, but lack of size and play strength will lead to him getting pushed back by size and power
—Hit-and-miss as a tackler
— Not someone that can be tasked with running with backs and tight ends in coverage

T.D. Moultry was a highly sought-after recruit out of the state of Alabama, earning national accolades and was recognized as a high school All-America selection. He opted to stay in-state and play on The Plains with the Auburn Tigers, seeing playing time right away as a true freshman. However, Moultry’s role on defense never expanded in the following seasons, serving more as a rotational edge defender/BUCK linebacker while rotating with other talented defenders along the Tigers defensive front.

When you watch the tape of Moultry on the field, you immediately notice a player that plays with his hair on fire nearly every snap. Moultry provides great effort as a pass rusher as well as a run defender, constantly playing chase to the football. Here against Arkansas, we see Moultry set the edge against the RT, then disengage the block to wrap up the RB coming through the hole to bring him down for a short gain.

We see that same constant effort as a pass rusher as Moultry wins with high effort. Watch this sack Moultry picks up against Alabama as he rushes on the jumbo TE, getting hands on his torso then rips off and swats down the hands of the RT to get into the pocket and bring down #9 Bryce Young for the sack.

Moultry rushes with a explosive first step on the snap of the football and his short, stocky frame allows him to get underneath taller offensive tackles, getting up underneath them and having the ability to jolt them back. We see that here against Texas A&M a couple years ago as Moultry rushes against the LT, getting up underneath his shoulder pads and forklifts him back into the pocket, tossing him to the ground as he arrives at the QB and swings him down for the sack.

There are instances where Moultry shows some hand usage as a pass rusher, more specifically a two-hand swipe move the knock down the hands of OL to defeat the block in pursuit of the QB. We see that on this rep against the Crimson Tide, swiping down the hands of new Steelers OL #79 Chris Owens and rips through to get into the pocket. However, Moultry is unable to turn the corner around the blocker as Young escapes the pocket and ends up slipping at the top of his rush.

You will notice a lot of times that despite being a shorter defender, Moultry plays with high pad level a lot, thus leads him to have poor balance on contact with blockers which makes it easy to stop his rush and put him on the ground. We see that here against the Razorbacks as Moultry gets stood up by the TE staying home to block. He tries to shed the block, but the TE gets underneath his shoulder pads and tosses him to the floor, pancaking him as the QB releases the pass.

Moultry also struggles with play recognition and spatial awareness as a defender. He often relies too much on his eyes, needing to see the ball before triggering to pursue it. He also makes lapses in judgement like on this rep where Moultry blows past the RT, crossing his face inside, but leaps into the air as Bryce Young starts to roll out to his right, ultimately hitting the deck and ends up on the ground as he scrambles for the first down.

We see another example of this where Moultry flies straight up the field on the snap of the football, creating a wide running lane on the right side and allows the tight end to run him clear out of the play as the running back runs toward his gap before being forced back inside by #21 Smoke Monday.

While Moultry has moments where he shows the ability to rush with power, it is far too inconsistent. His short stature and lack of length allow tackles to get hands on him early and stall his rush, lacking the size and power to push the pocket once covered up like we see here against the RT of Alabama.

Overall, Moultry is a short and thick edge defender with good straight-line athleticism and plays with a high motor. He has the capability to set the edge and provide some juice as a pass rusher due to his effort and his pursuit to the football. However, Moultry lacks the hand usage and a consistent pass rush plan to be a productive EDGE, being more disruptive than productive. His lack of size and length show up in his ability to push the pocket consistent and shed blocks, leading to up-and-down play against the run. Moultry also plays incredibly amped up, sometimes being his own worst enemy in terms of pad level and taking himself out of the play.

Moultry’s best shot of getting a roster spot would be showing out on special teams and being more consistent as a pass rush specialist. His motor and effort are much appreciated, but he needs to prove to be more than that to have a shot of making the team. As it stands, Moultry has an outside shot of making the practice squad and likely may find himself one of the first ones out at training camp unless he becomes a more consistent, disciplined edge defender.