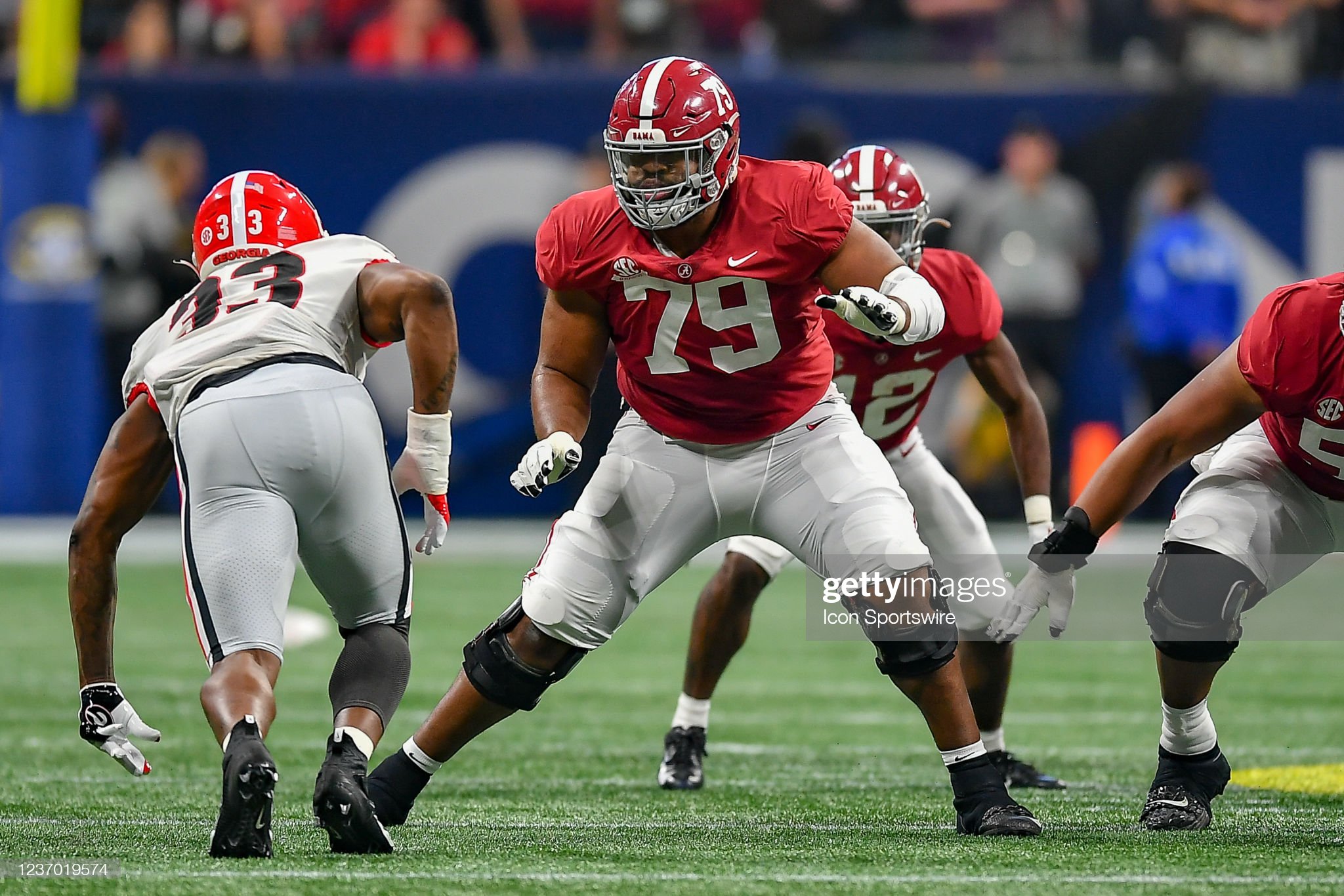 A 2022 UDFA scouting report on Alabama OL signed by the Pittsburgh Steelers after the draft.

-Only participated in position drills at Pro Day

— Well-built frame top to bottom with impressive hands and length overall
— Multi-year starter across offensive line at premier program like Alabama
— Good athlete in space overall with loose hips to turn and get out in front on pulls
— Powerful hands that can latch on and win control inside quickly
— Sits well into his hips and can anchor quickly when able to diagnose bull rush quickly
— Sound awareness overall, able to quickly and seamlessly pass off twists and stunts inside or outside
— Flashed nasty demeanor in the run game as an interior linemen in recent seasons
— High hit rate on the move; very comfortable in space overall and flashes power

— Tends to stop his feet and try to catch defenders in pass protection, leading to major losses quickly
— When shooting hands with initial punch, will drop his head and miss with punch entirely, whiffing on block
— Heavy feet in his pass set on the edge; struggled to gain depth in pass set overall, especially against speed rushers
— Pad level is far too high inside and out
— Limited range overall at tackle in the run game and in pass protection; much better suited inside
— Finds his way onto the ground quite a bit on the edge, does not appear as confident at tackle as he did at center earlier in career
—Slow to counter hands in pass protection; late to fire initial punch and then struggles to regain hand placement against more nuanced rushers

— Played in 38 career games at Alabama, starting 20 during four-year career
— Saw action at center and right tackle and tight end during four years with Crimson Tide
— Accounted for 19 knockdown blocks for Alabama in 2021 while playing over 1,000 snaps
— Former 4-star recruit as a guard
— Competed in the Under Armor All-American Game coming out of high school in Texas
— Former ESPN top 300 player in the 2016 class

Starting 20 games over four seasons at the University of Alabama, including 12 of 15 games in 2021 at right tackle, new Pittsburgh Steelers’ UDFA Chris Owens brings quite a bit of experience overall to the table as part of an intriguing UDFA class overall.

A former four-star recruit at guard, Owens transitioned to center early on in his time at Alabama and started a handful of games in a reserve role. Ahead of the 2021 season though, Owens kicked outside to right tackle, where he started 12 of the Tide’s 15 games on the way to the national championship. During his time at tackle, Owens had more lows than highs, and appeared mostly uncomfortable overall on the edge, struggling with his pass sets overall against quicker, better athletes.

With his height and weight, he profiles as more of an interior offensive linemen, especially with his great length overall. Prior to the 2021 season, he didn’t have many issues in pass protection or in the run game on the interior. Some of the issues with athleticism, hand usage and overall ability to gain depth in his pass sets.

Though there were some struggles throughout his tape, he flashed at times overall at tackle. The Texas A&M game from 2021 showed the good and the bad from Owens in the 89 snaps the Crimson Tide ran in the loss to the Aggies. Owens had some good reps against the likes of DeMarvin Leal, Tyree Johnson and Michael Clemons, and some downright awful reps as well.

In space as a run blocker I was pretty impressed with Owens. He exploded out of his stance and was able to snap his hips and get around the corner, landing a block on the Aggies’ defensive back, giving the running back a lane. When he’s on the move throughout his film, he had a good hit rate overall, consistently taking good angles to defenders and ensuring that he gets a hat on a defender, rather than getting caught looking around or running into space in general.

Owens is rather strong overall, which allows him to sit well into his hips and anchor, which he flashed at times against A&M. Here against New York Jets’ draft pick Michael Clemons, Owens does a great job sitting into his hips quickly, dropping his anchor to stop Clemons’ bull rush, giving quarterback Bryce Young ample time to get the throw off.

Though I have issues with his overall hand usage at tackle and his ability to gain necessary depth in his pass sets, he showed the ability to counter quickly and reset in pass protection against Leal on the edge, as seen above. He tends to get his hands knocked away far too easily in his initial punch, but he does a great job here repositioning and sliding his feet to stay in front of Leal, keeping the pressure off the quarterback.

I really do like Owens in space, especially climbing to the second level. He moves very well for his size, and the hit rate is rather impressive. He does a fantastic job here on the screen, getting out in front before having to adjust on the fly and change course to ensure he gets a hat on the A&M linebacker. That’s a great job of overall body control and footwork to contort like that and still get the knockdown block in space against the athletic linebacker.

When he’s able to get his hands inside against a pass rusher on the edge, he has the grip strength to win quickly and control the rep. Here against Georgia in the SEC Championship Game, he does a great job against the inside rush, gaining control quickly and washing the pass rusher down the line of scrimmage, helping create a lane for the quarterback to step up into and make a play. His footwork here is sound as well, as he doesn’t get crossed up at all, maintains a strong base and wins the rep.

Of course, things can go rather poorly for Owens at tackle, and they did often. He struggled to vary his pass sets overall, which allowed experienced pass rushers to attack him in various ways. Clemons gave him fits with bull rushes throughout the game, putting him on skates here. His pad level is too high and didn’t have his feet underneath him, leading to the brutal rep overall.

One thing I noticed with Owens when going against speed rushers was that he really struggles to gain depth in his pass sets, which makes it hard for him to counter the speed. Here against Tyree Johnson, he has more of a horizontal set than a vertical one and realizes his mistake quickly. He shoots his hands late, but in the process drops his head, allowing Johnson to swipe his hands clean and turn the corner for the sack. Here you can see Owens playing with heavy feet overall.

Overall, I like the experience Owens brings to the table at multiple positions, and I like the way he plays in space when climbing uphill. He’s good on the move and his high hit rate is easy to work with, whether that’s at tackle or on the inside at center and guard. I do have real concerns with his footwork and hand usage in pass protection, especially on the edge, which has me leaning more towards him sliding back inside in the NFL with the Steelers, rather than staying at tackle longterm.

Owens projects as a developmental piece on the practice squad for the 2022 season for the Steelers overall, with a ceiling of depth swing linemen in the NFL longterm, should he be able to stick on a roster moving forward.