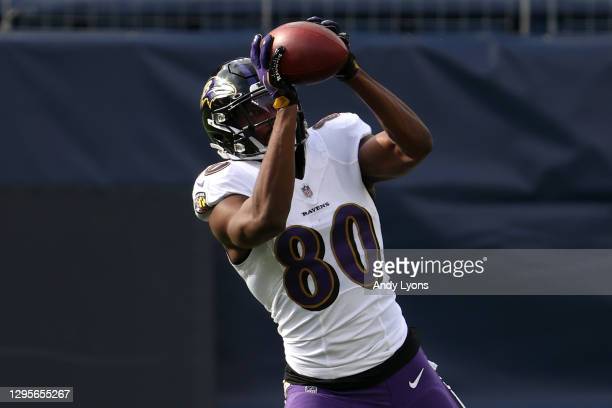 Reasoning: With the Steelers adding two wide receivers in the first four rounds of the 2022 NFL Draft, the roster prospects of the recently-claimed veteran Miles Boykin have taken a substantial hit.

While his health was a factor in terms of his positioning on the depth chart, the fact of the matter is that Miles Boykin, as a third-year former third-round pick, was among the most experienced and highest-pedigreed wide receivers on the Baltimore Ravens’ roster a year ago, but played all of 35 offensive snaps in eight games.

If you think it’s just because he wasn’t on the field, he played a career-high 144 special teams snaps, 63 percent of the special teams snaps performed in the games for which he was active. He simply fell out of use, out of favor, however you want to put it. He was targeted one time all year. Once.

And he’s some lock to make the Steelers’ roster? Absolutely not. Just because they claimed him off waivers when the Ravens released him doesn’t mean he’s a shoo-in to dress in the black and gold on Sundays come September.

Indeed, even in the aftermath of losing JuJu Smith-Schuster, James Washington, and Ray-Ray McCloud, I wouldn’t say his roster prospects are looking too fantastic. They still retain Diontae Johnson and Chase Claypool, and they added a return man in Gunner Olszewski.

To that group, they added two wide receivers via the draft, in George Pickens with their second-round pick and Calvin Austin III two rounds later. Both are obviously going to make the 53-man roster, or at least it would be extremely surprising if they don’t.

That’s five wide receivers there, and then there’s Boykin’s salary as a complicating factor. Even if Boykin plays a bit better this summer than a Steven Sims or an Anthony Miller, they would have veteran-minimum contracts, while he would be due $2.54 million due to him still being on his rookie contract and having his year-four salary boosted courtesy of the Proven Performance Escalator.