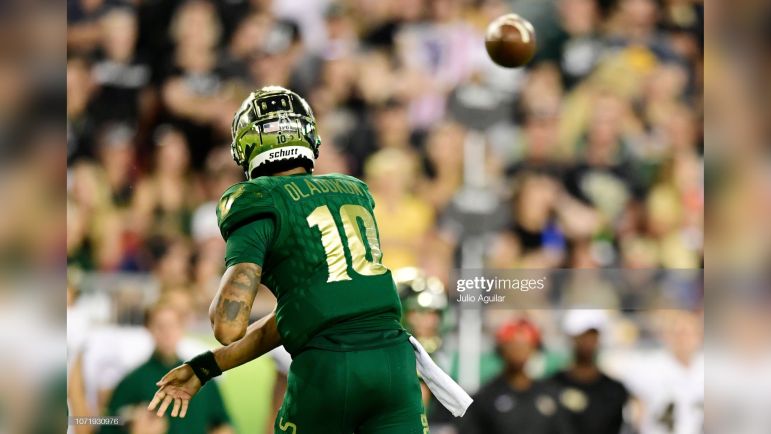 Reasoning: The Steelers used their final draft pick to double down on the quarterback position, selecting South Dakota’s Chris Oladokun to add a fourth player to the position as they head into training camp.

Through a combination of reading the tea leaves and sheer dumb luck, our own Alex Kozora accurately mocked Chris Oladokun, as a second quarterback draft pick, to the Steelers in his final mock draft in the seventh round.

Having only two quarterbacks on the roster prior to the draft, only one of whom had experience in the system, however, it was a given that they would add two, one way or another. It was not a given that both would come via draft selections.

There has been plenty of debate about the decision already, but that’s not to be rehashed in this article. Could they have just inked the best available college free agent who was willing to sign for whatever they were willing to offer? Of course. But they didn’t.

Instead, they have Oladokun, who came in for a pre-draft visit, making their interest in him obvious enough to be able to identify. But where does he fit in? Can he really make a run at making the 53-man roster, behind Kenny Pickett, Mitch Trubisky, and Mason Rudolph?

Accomplishing that feat might well hinge on the Steelers being able to find a trading partner for one of their veteran quarterbacks—Rudolph being the overwhelmingly more likely veteran they would be willing to deal—in addition to the rookie actually earning a roster spot.

Retaining him on the practice squad always remains a possibility if he does not make the 53-man roster, assuming that he is not claimed off waivers by another franchise, which is always a potential risk when one releases non-vested veterans.

We’ll all just have to see how the offseason plays out. If Oladokun plays well, then he can certainly at least make things interesting, even if almost everybody will instead be focusing on Pickett and gauging whether or not he has a chance to start right away or has to sit for a while.