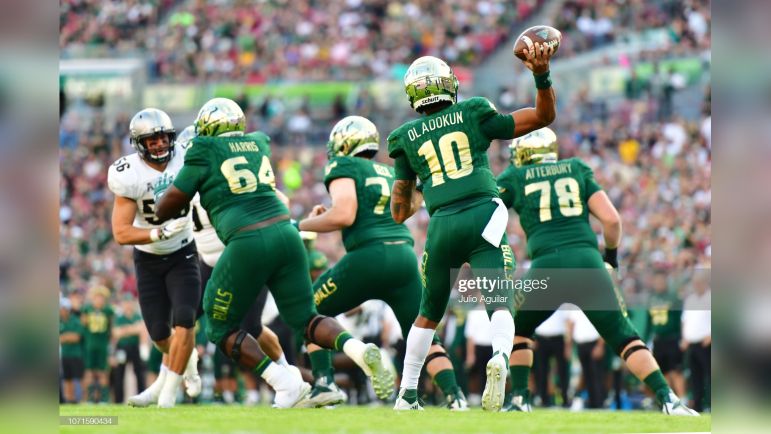 Question: What are Chris Oladokun’s chances of making the 53-man roster?

The Steelers made it clear all offseason that they were going to go into training camp, as they always do, with four quarterbacks on their 90-man roster. Even with the tragic death of Dwayne Haskins, they endeavored to hold true to their intentions, drafting two quarterbacks last week.

Not only did they take Kenny Pickett in the first round, they also finished off their draft class with another arm selection, taking South Dakota’s Chris Oladokun in the seventh round, with their second of two picks in the round.

But with Pickett joining Mitch Trubisky and Mason Rudolph, both of whom have NFL starting experience, how much of a chance does Oladokun really have of making the 53-man roster? What is the possibility that, for example, his level of play encourages them to seek to trade Rudolph?

Obviously, Pickett isn’t going anywhere. It’s rather unlikely, unless they get a very generous trade offer, that Trubisky is a piece they would be willing to move. I wouldn’t bet on them outright releasing Rudolph, though it’s not impossible—during Rudolph’s rookie year, Joshua Dobbs won the backup job and the team released Landry Jones.

Oladokun has some interesting traits that no doubt the Steelers would like to keep around. Certainly, he has some mobility in his game, and perhaps they believe they can develop him. But development is for the practice squad.

I think a lot of things would have to go right for Oladokun to make the team outright, including him, of course, proving worthy of a roster spot. Pickett would, at the very least, have to show that he can be the backup this year, if not the starter. If Rudolph doesn’t get released, then they would have to get the right value in a trade as well, which may take an injury elsewhere in the league to occur. But it’s not out of the realm of possibility.