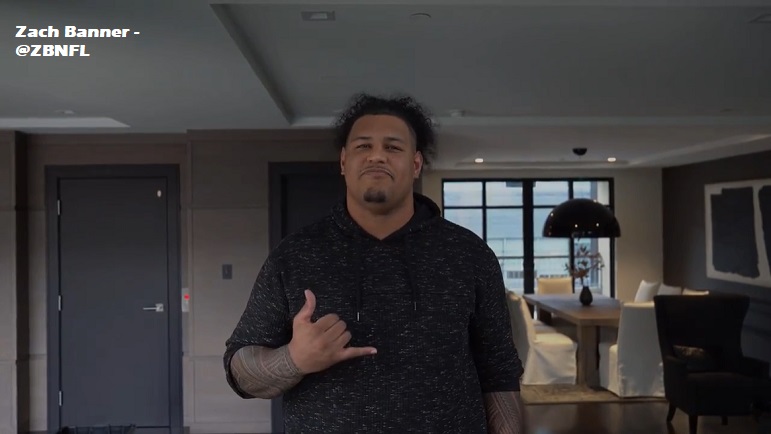 Its been a little more than two weeks since the Pittsburgh Steelers parted ways with tackle Zach Banner and on Saturday he officially said his thank yous and goodbyes to fans via a social media video.

Below is what Banner said in his video:

“What’s up guys. These last couple weeks have been difficult and hard. But before I left, I just wanted to say, bye. You know, I think since 2020 and since the injury, I have been seeking to fight back and it’s just been uphill from here. And I’m gonna keep pursuing that same dream that I had before the injury. It’s just unfortunately not gonna be here in Pittsburgh. And I’ve come to accept that. I’m gonna be all right. And just wanted to say thank you to all the fans, to the whole city. Thank you to my friends and my teammates that I’ve met over these last couple years. This city means so much to me and it’ll be hard saying bye. But no punch-lines, no mic drop, nothing. Just love yinz.”

Banner’s story is one that is very unfortunate. After finally winning the starting right tackle job during the team’s 2020 training camp, Banner suffered a season-ending right knee injury in the team’s Week 1 game that season against the New York Giants. Last year during training camp and the preseason, it initially looked like Banner would make it back from that injury. A setback of some sort, however, combined with another stint on the Reserve/Injured list, severely interrupted that comeback and limited his 2021 playing time.

In total, Banner managed to play just five offensive snaps and 27 special teams snaps in 2021 on the the heels of him signing a two-year, $9.5 million contract last offseason. He was due to make $5 million in 2022 and the Steelers decided to part ways with him at the start of the league year.

It will now interesting to see if Banner is able to land with another team this summer so that he can get a chance to prove himself during training camp. We all should wish him well. He is a good human and he did a lot in the Pittsburgh community while a member of the Steelers.