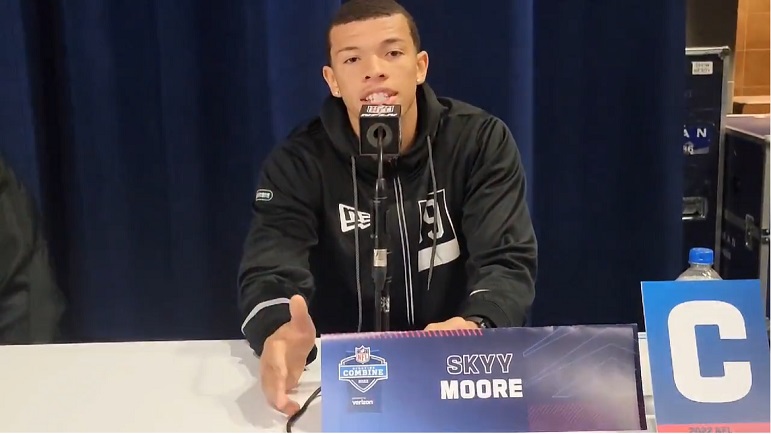 Something that I’ve kind of loosely tried to keep a mental log of over the years are the players who I felt like were destined to be drafted by the Pittsburgh Steelers, who later would indeed be drafted by the team. Players like James Conner immediately come to mind. Is Skyy Moore, from Shady Side Academy, one of the next ‘destined’ Steelers?

It’s hard to call him the only potential player of destiny in a class that includes Cameron Heyward’s little brother, of course, a guy who could also find himself headed to Pittsburgh via the seventh round or as an undrafted free agent. But if Moore comes here, it’ll be early, and he’ll be as excited about it as the fans.

He recently hopped on the radio with Andrew Fillipponi and Chris Mueller to talk about the upcoming draft in a couple of days on 93.7 The Fan. While they hit a variety of topics, toward the end, he was asked about if there was much realistic hope he would be wearing black and gold.

“You can definitely keep your fingers crossed. That’s what I’m hoping. I’m with you guys. I know as much as you do”. Later, he was asked about head coach Mike Tomlin’s phone calls to the players he drafts. “I don’t know how he does them”, he admitted, “but I know if I see that 412 number pop up, I’m gonna be real happy”.

While at Shady Side Academy, Moore just so happened to be teammates with Dino Tomlin, whose father you can probably figure out without me mentioning. In other words, he is already very familiar with the Steelers, and they him, going back to before his college career, where he played at Western Michigan.

Moore declared as an underclassman, and is likely a Day 2 draft pick, though the first round is certainly not impossible. He would be an ideal fit in the slot in the Steelers’ offense, so it certainly wouldn’t be a difficult connection to make if he happened to be available in the second round for his hometown team.

Interestingly, the Tomlins didn’t even know him as a wide receiver. Moore played defensive back and quarterback until he got to college, but he proved able to do it. He had a breakout season last year with 95 receptions for 1,292 yards and 10 touchdowns.

He tested well at the Combine and showed well in his Pro Day, so he certainly hasn’t hurt his stock any during the pre-draft process. He’s an easy player to like when you watch his tape, or when you listen to him talk, so he should be quickly embraced by Steelers fans if he finds his way into the building as the latest second-round wide receiver, to replace the two that just left in free agency.