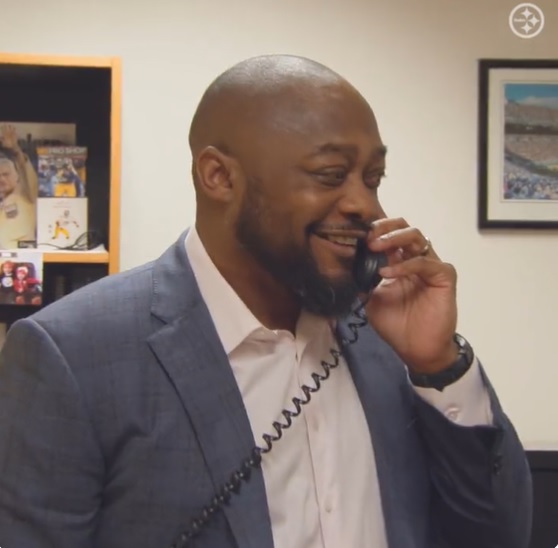 There will be debate over if the Pittsburgh Steelers made the right pick by choosing Kenny Pickett.

But there’s no debate over which head coach has the coolest “welcome to the team” phone calls. It’s Mike Tomlin in a runaway.

The Pittsburgh Steelers’ Twitter account tweeted out the call that made Pickett the 20th pick and a Steeler. And it’s classic Tomlin, clearly geeked to see Pickett – and all the QBs – fall to #20.

Only Tomlin can joke around by asking his next franchise QB if he’s watching TV with his family tonight. Going to go out on a limb and say they were gathered around the couch.

In fact, you can check out Pickett on the receiving end of the phone call here.

Kenny Pickett is a Pittsburgh Steeler

The moment he gets the call and finds out he’s being selected with the 20th overall pick in the #NFLDraft pic.twitter.com/Zk38Gi2Ey9

Clearly an emotional moment and a happy family that, as one person in the video can be heard saying, knows they can stay home. Pickett grew up in New Jersey but played his college ball at Pitt, joining James Conner as Panthers’ products who get to live a great story along with their NFL dreams.

Tomlin cited Pickett’s maturity, pro-style readiness, and high floor as reasons for why he was the team’s selection over all the other QBs. Now, Pickett will be tasked to replace Ben Roethlisberger as the team’s starter, likely sooner than later.