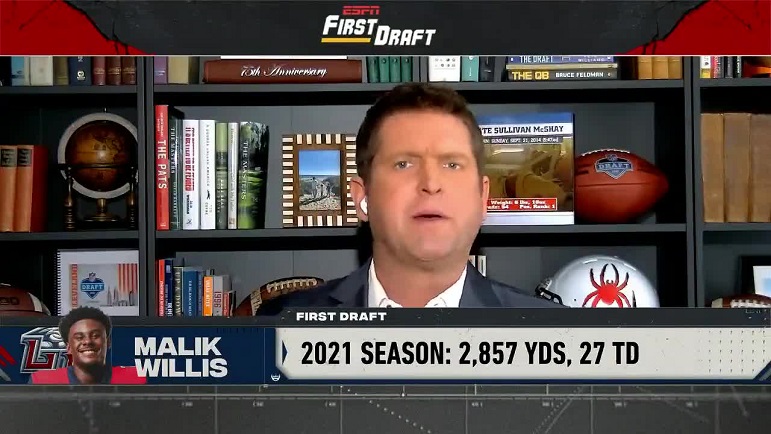 Are you tired of hearing about the 2022 quarterback draft class? Well, if you are, you are probably not going to want to read the rest of this post, especially if you’re against the Pittsburgh Steelers selecting Liberty quarterback Malik Willis in the first round.

On Monday, ESPN draftnik Todd McShay released an article based on what is hearing on top prospects, quarterbacks, early picks, and team strategies, and in it he had an interesting nugget related to the second topic.

“As it stands right now, my sources don’t believe there is a team in the top 19 picks that will be drafting a QB,” McShay wrote on Monday. “There’s always a shock on draft night, and teams always look to trade up for a signal-caller, but the Pittsburgh Steelers at No. 20 is the first spot I’m hearing serious QB consideration.”

As you would expect, McShay dove deeper into his thoughts on Willis to the Steelers and the likelihood that such a thing could happen in the first round

“Word is that the Steelers like Liberty’s Willis, so the question for Pittsburgh GM Kevin Colbert and coach Mike Tomlin: Can they pull a Bill Belichick and just hold tight for their guy? (New England stayed put at No. 15 last April and landed Mac Jones.),” McShay added.

I would expect McShay to get blasted for his Monday comments on the quarterback class, especially the part of him thinking that Willis will last to 20. Why? Because I have been blasted all offseason for suggesting that there is a chance that Willis could last on the board until 20th overall.

It’s obvious that Willis has had the Steelers attention all offseason. Because of that, nobody should be shocked if they select Willis in the first round of the 2022 NFL Draft, even it includes them trading up to do so.

How rare would it be for no quarterbacks to be drafted within the first 19 selections of the 2022 NFL Draft? Well, you would need to go all the way back to 1997 to find the last time such a thing happened. That year was the year that quarterback Jim Druckenmiller was selected 26th overall out of Virginia Tech by the San Francisco 49ers.

2014 was the last time that just one quarterback went in the first 19 selections of a draft. That was the year that quarterback Blake Bortles went third overall to the Jacksonville Jaguars out of Central Florida, and then Johnny Manziel went 22nd overall to the Cleveland Browns out of Texas A&M.