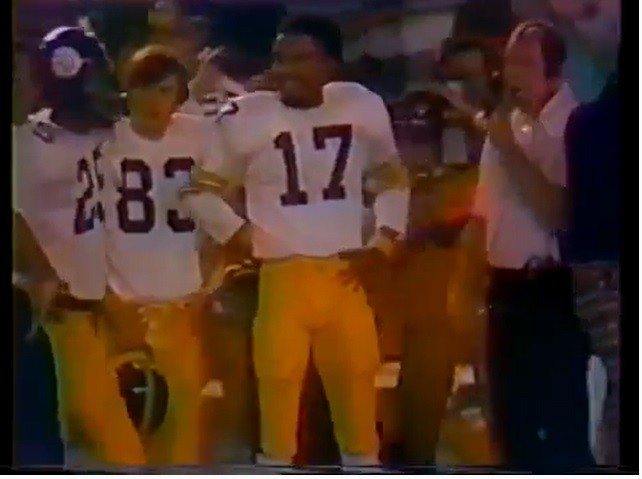 I know, this topic seems out of the blue. But watching this weekend’s slate of USFL games is as good a reminder as any how bad quarterback play can be. Quarterbacks aren’t like pizza. When it’s good, sure, it’s good (unless you’re on the Maulers). But when it’s bad, quarterback play – unlike pizza – is really bad.

But none of those performances rival what happened to the Steelers’ Joe Gilliam on December 3rd, 1973. Arguably the worst game by a Steelers’ quarterback. Ever.

We’ll get to the footage in a second but the stat line is all you need to tell the story: 0/7, 0 yards, 3 INTs. What else is there to say?

Gilliam didn’t complete a single pass. Well, he threw three to the other team. It was Gilliam’s first start, one created out of necessity. He was the only option left. Terry Bradshaw had missed more than the last month after suffering a separated shoulder in an October game against the Cincinnati Bengals. Backup Terry Hanratty was unavailable for the Dolphins game after hurting his wrist the week prior. So the ball was put into Gilliam’s hands. Bradshaw would dress but serve as the team’s backup only playing it, as announcer Howard Cosell indicated pre-game, “if necessary.”

Bradshaw’s services ended up being necessary.

Gilliam threw seven passes. None fell into Steelers’ hands. A look back at each of those throws.

Lynn Anderson sung the National Anthem. And Pittsburgh received the ball to start the half. The first play of the game was innocent enough, a run off left side by Franco Harris for minimal gain. Chuck Noll dialed up a pass on the second play of the game. A three-step drop and quick throw right side for WR Ron Shanklin.

Incomplete. Now facing third and long, Gilliam took a deep drop and under pressure (cue to the announcer: it wasn’t good protection), fired to his right. Dolphins’ DB Dick Anderson, who picked off eight passes in a season three separate times in his career, jumped Gilliam’s pass and grabbed it as he rolled to the ground. He got up and had green grass into the end zone but, perhaps a bit dizzy, cut back into the field of play. It made the return a bit bumpier but Anderson still found the end zone, a 27-yard runback to put Miami in the lead three plays in.

Pittsburgh ran the ball their next two plays, called for holding on first down and attempting a draw with Harris on the new first-and-20. Facing second and long and running into a wall, Noll gave in and threw. Gilliam heaved deep but the pass was batted in front of his face and fell incomplete as Dolphins’ fans roared.

Pittsburgh dialed up another deep shot on third down as Gilliam looked right side for the third time, though here threw way downfield with his talented arm. But Shanklin was swarmed by a pair of Dolphins’ defenders and the pass fell incomplete. Punt.

Miami punted on their first offensive possession but Pittsburgh started their third drive backed up on their own 15. Preston Pearson took a trap right side for nothing while Franco Harris got nowhere fast on a FB belly. Like it or not – and he probably didn’t – Noll had to throw.

For the first time, Gilliam looked left side. His pass sailed high and was intercepted by Curtis Johnson to setup shop deep in Steelers’ territory. So far, Gilliam was 0/5 with two interceptions and the Steelers had yet to record a first down, much less a point.

Pittsburgh’s defense held firm and forced Miami to settle for a 28-yard, Garo Yepremian field goal. After a brief commercial break from the friends over at Savings and Loans and Joe Namath shilling for Brut Cologne (I like the smell, I like the way it works, the way it lasts), Gilliam’s Steelers again took the field. Their third drive was run, run, run, punt. It wasn’t a turnover so it was a victory.

Yepremian nailed another field goal, this time from 46 yards out before kicking into the end zone for a touchback. Down 13-0 and doing nothing offensively, Noll got aggressive and dialed up playaction on first down. Gilliam reared back and found an open TE John McMakin right side. But McMakin, summing up the day it’d been for Gilliam and this offense, dropped a catchable ball.

A short second-down run created third and long and Gilliam dropped back one last time. Again facing pressure up the middle, he threw right side and was intercepted a third and final time on the right. Dick Anderson snatched another one, an eerily similar play to Gilliam’s first throw. This one would be his last.

Terry Bradshaw replaced replaced Gilliam the next drive to finish out the first quarter, whose day officially ended with one of the ugliest lines in football history. No completions on seven attempts and three interceptions.

Bradshaw, his first game back after injury, fared a bit better. He equaled Gilliam’s three picks but tossed two touchdowns, hitting Pearson and Harris for scores, while Harris got the run-game going with a 105 yard performance. The Steelers attempted a valiant comeback and made it a one-score game by the fourth quarter. But Miami held on, winning 30-26. Anderson finished the game with four interceptions and two pick sixes, one off both Steelers’ quarterbacks (each coming before the first half even ended), making him the second and most recent defender with such a stat line in NFL history.

Gilliam’s performance isn’t without near-record status either. To date, he’s only the second quarterback in NFL history, and they’ve been playing the game a long time, to throw three interceptions in a game without ever completing the pass. The other, the first, came in 1965. Also by a Steeler, Ed Brown, who went 0/4 with three picks to the Cowboys.

If you want to watch the entire night, check out the link here.

What the USFL, and often the NFL, shows is some tragically ugly QB play. But it’s hard to imagine anything will top this performance by Gilliam, who had all the talent but battled demons off-the-field that led to a short-lived, unsuccessful pro career. None worse than his first.