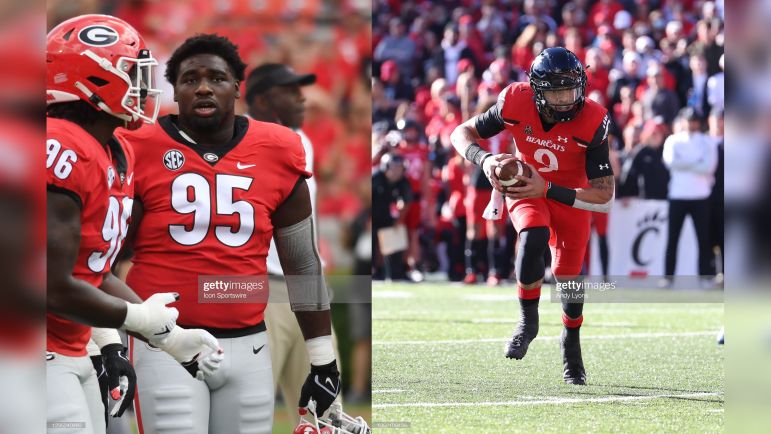 Even though they already signed a quarterback in free agency, the position remains the Pittsburgh Steelers’ number one need. The team has not been shy about broadcasting that, with head coach Mike Tomlin acknowledging that it was their intention to target the position in this month’s upcoming 2022 NFL Draft.

How they do it and who they might draft remains the mystery, but it’s certainly made the mock drafts pretty predictable. At least the one offered by Mark Kaboly of The Athletic this past week shakes things up a bit—he actually has the Steelers winding up with two first-round picks.

Kaboly’s Steelers mock has Pittsburgh drafting defensive lineman Devonte Wyatt out of Georgia with their first, natural, first-round draft pick. He cites the obvious—aging starters and uncertainty in Stephon Tuitt’s situation—as the reason. After that pick is when it gets interesting.

He has the Steelers trading their second- and fourth-round picks, as well as a 2023 second-round pick, in order to trade back into the back end of the first round at pick number 32, and using that selection to draft quarterback Desmond Ridder out of Cincinnati. They also get back a third-round selection and a 2023 fourth-round selection. He writes:

Ridder seems like this year’s version of Mac Jones, and we saw what he did with the Patriots a year ago. Ridder is an intriguing prospect with skills the Steelers like.

He is mobile and can get himself out of trouble with his legs and either run or make throws down the field. He can go into the shotgun, run the read-option, RPOs (a big part of Matt Canada’s offense) and use play-action. He isn’t going to throw the ball 70 yards, but his intangibles are off the chart.

Ridder is one of the more polarizing of the top quarterback prospects coming out of college. I’m personally in the camp that doesn’t really believe in his ceiling, and think that he will struggle to fully develop as a pocket passer who can deliver in all situations, so I wouldn’t be thrilled with this particular mock. But it’s not implausible. The Baltimore Ravens did a similar thing to draft Lamar Jackson.

This was a full seven-round mock draft, though, so let’s finish this thing out. In the third round, Kaboly has Pittsburgh picking up wide receiver Khalil Shakir out of Boise State, whom he pretty much pencils into the slot position.

With their second third-round pick, they draft tackle Rasheed Walker out of Penn State. They don’t have another pick until Round 6, where they add edge Jeremiah Moon out of Florida, before completing the draft in the seventh round with cornerback Chamarri Conner out of Virginia Tech, and Connor Heyward, whom you better know without me elaborating.

What do you think of this mock draft? This is the first one I’ve seen that has the Steelers trading up for a second pick in the first round. I find it interesting in concept, even though I would not love the selection of Ridder as the quarterback.