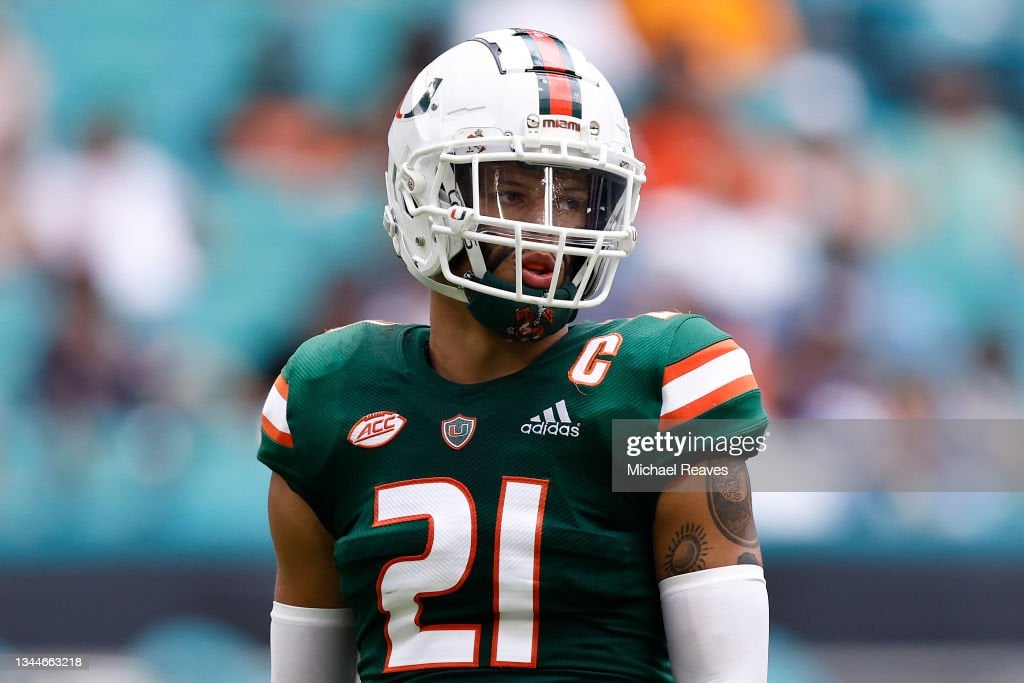 New to Steelers Depot, we will be highlighting a few less-heralded prospects at each position group in lead up to the 2022 NFL Draft that likely won’t go until Day Three, but present potential value as sleepers in the later rounds. This week we will be listing highlighting a few safety prospects that may not be getting the same name recognition as some of their peers but have the traits to develop into quality players at the next level.

Bubba Bolden was a first-team high school All-American at high school powerhouse Bishop Gorman High School in Las Vegas. He signed with USC and played in 13 games his true freshman season, but ended up getting suspended in 2018 after being accused of violating the student code of conduct pertaining to underage drinking at an off-campus party. Bolden was later cleared of all accusations, but decided to transfer to Miami where he had mixed results, becoming second-team All-ACC pick in 2020 for leading the team in tackles, but missed numerous games in 2019 due to a dislocated ankle and five games in 2021 due to shoulder injury. Still, the 6’2, 209lb safety has shown to be a capable tackler in the box along with the ability to cover ground on the backend as a single-high safety.

Kyle Hamilton is the consensus top safety prospect. This class is pretty good!

Miami safety Bubba Bolden is the topic of my next piece! I love his traits and potential! pic.twitter.com/kPnyF8l8yj

Bolden ran well at the NFL Combine (4.47 40) and was once touted for being one of the top safety prospects in this draft class prior to the start of the 2021 season and the recent shoulder injury. The injury history, age, and lack of ball production during his time in college has surpassed his draft stock, likely making him a late Day Three or possible UDFA candidate. Still, the athletic talent is there paired with a long, well-built frame for Bolden to come in as depth and a special teams ace which he showcased during his collegiate career in attempt to make the roster as a backup as he develops his traits and minimizes his mental errors to earn playing time in the league.

Another East/West Shrine Game invite that also is a super senior at safety is Middle Tennessee’s Reed Blankenship. Blankenship stepped into the starting lineup as a freshman for the Blue Raiders and earned honorable mention all-conference honors. He built off his successful first season and became one of the top defenders in C-USA in 2018 where he led MTSU with 107 tackles (eight for loss), intercepted four passes (one returned for a score) and broke up seven others. He would have replicated his results in 2019, but suffered a broken leg seven games into the season. He returned from the injury and was productive in his final two seasons at safety, officially becoming MTSU’s all-time leader with 419 total tackles, including 265 solo stops.

An intriguing Day 3 option at safety would be #MTSU S Reed Blankenship. Dude has some RANGE man, he plays this double post combo beautifully.

I know my guy @DanteCollinelli is a big fan if his. pic.twitter.com/M2vQTbZs3E

Given his age and limited athletic profile coming from a smaller school in C-USA, Blankenship is expected to fall somewhere on Day Three as special teams ace as well as a versatile DB that can play split zone, in the box, in the slot, and in some single-high looks. Still, he plays with his hair on fire and is a vocal leader on the football field that also leads by example being a three-year team captain. He willing be a willing tackler and has the instincts to put himself in position to make plays on the football in coverage. If a team is looking for a suitable #3 safety that can wear a variety of hats and potentially earn more of a role should the athletic limitations be minimal, Blankenship could be a great value pick to add to a team’s secondary.

Oklahoma State S Kolby Harvell-Peel gets plenty of the headlines from the national media, but Tray Sterling is another draft-eligible safety prospect from the Cowboys that deserves his own recognition. The 5’11, 205lb senior came on strong during his sophomore and junior seasons in Stillwater, going over 70 total tackles in both seasons and racked up 19 TFLs, 12 PBUs, 3 FF, and 3 INTs during that period of time as a productive member of the Pokes defense.

Sterling set himself up to have a strong senior campaign in 2021, being recognized as a Pro Football Focus Preseason All-American as well as being named to the Senior Bowl Watch List, but a debilitating wrist injury suffered back in 2020 that was misdiagnosed as a sprain revealed multiple torn ligaments in his right wrist, limiting him to only five games played in his final season at Oklahoma State before undergoing surgery. He was invited to the College Gridiron Showcase this pre-draft season, suggesting that teams still have him on their radar, although not to the extent he was prior to the injury. Should Sterling be healthy, he could be a savvy pickup late in the draft or as a UDFA that can provide meaningful depth to a safety room.

Continuing this thread, Ok State S Tre Sterling III (@sterling__trey) comes up and makes a huge play to close out the upset victory vs 11-point favorite ISU. A versatile defender with 70 tackles, 8 TFLs, and 1.5 sacks, he’ll have no issue finding a role with an NFL team. pic.twitter.com/hdX3Y7Lgkb

Joey Blount qualifies for this list as a name that was flying way under-the-radar up until it was announced that he would be one if the Steelers pre-draft visitors coming to Pittsburgh to tour the facilities and meet with the team. Blount took part about his visit with the Steelers in a recent interview and specifically talked about a previous encounter with HC Mike Tomlin:

Virginia S Joey Blount on Path to the Draft to talking pre-draft visit with the Steelers and a cool story about HC Mike Tomlin. #Steelers #NFL pic.twitter.com/6krRk6IqM4

Alex Kozora of Steelers Depot jumped on the pre-draft profile on Blount once news broke that he would be visiting Pittsburgh and came away very impressed with what he found stating the following:

Blount is an excellent prospect. He’s checking all the right boxes and should at least make an immediate special teams impact given his effort, speed, tenacity, and tackling ability. But his ceiling is someone who can be much more than that. I like him as a box safety who can cover over slot too, blitzing off the edge and filling the C gap against the run.

Joey Blount (@JoeyBlount8) does a bit of everything for Virginia. Here is is blitzes from the bottom of the screen… forcing the throwaway from Trevor Lawrence. Check the closing speed here. pic.twitter.com/LhaHJZqZHn

Kozora notes in his pre-draft profile that the big knock on Blount is his durability as he dealt with injuries throughout career and struggled to consistently stay on the field. Still, he has been highly effective when on the field for the Cavaliers (303 tackles, 19.5 TFL, 9 INTs, 5.5 sacks 3 FFs in his career) and just ripped off a superb Combine workout (4.45 40, 4.33 short shuttle, 6.90 3-cone, 10’7″ broad, 38″ vert, 20 bench reps at 6’1, 201lb). His name has been floated around as a late Day Three/UDFA for months now, suggesting that his value truly is suppressed by the injury history and potential stiffness in his frame. Should teams be comfortable with the medical, Blount could be the ideal dart throw on Day Three of the 2022 NFL Draft that could pay off in a big way.

VA S Joey Blount is an aggressive defender who comes downhill fast in the run game. He's also capable of big hits over the middle, as this Duke WR discovered, and grabs INTs when opportunities arise. #SnapScout21 pic.twitter.com/53XWYYzjCL