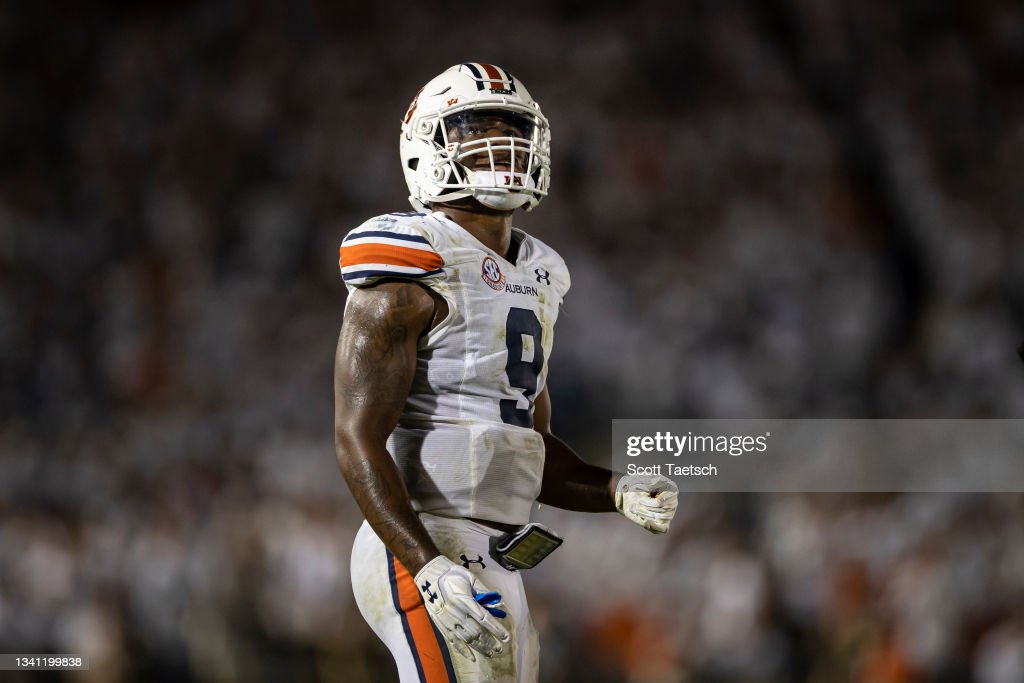 New to Steelers Depot, we will be highlighting a few less-heralded prospects at each position group in lead up to the 2022 NFL Draft that likely won’t go until Day Three, but present potential value as sleepers in the later rounds. This week we will be listing highlighting a few off-ball linebackers that may not be getting the same name recognition as some of their peers but have the traits to develop into quality players at the next level.

Campbell came over from Maryland this past season as a graduate transfer, appearing in 25 games and started six for the Terrapins from 2018-2020. He showed promise in a pandemic-shortened 2020 campaign, leading Maryland with 43 total stops (22 solo) and 5.5 TFLs in just four games. However, Campbell broke out in 2021 for the Rebels, posting 109 total tackles (47 solo), 12.5 TFLs, six sacks, two forced fumbles, three fumble recoveries, and two PBUs in 13 games of action in 2021.

Chance Campbell with the defensive play of the game so far pic.twitter.com/RsL8hAd9nm

Campbell capped off his stellar final season in college with a great Combine performance as he ran a 4.57 40, jumped 39.5″ in the vert and 10’7″ in the broad, showing off some serious athleticism. Still, Campbell’s name isn’t often brought up with the other top names in this draft class, and likely slots in somewhere on Day Three due to one having one season of high-tier production. Should a team feel comfortable with Campbell the player and believe that he can build off his strong end to his college career, he could come in as an initial depth piece and core special teamer with the chance of earning starter’s reps in the middle of the defense down the road.

Rodriquez is an interesting prospect for several reasons. On one hand, he is a good athlete (4.52 40, 39″ vert, 10’0″ broad) that was a four-year starter for the Cowboys defense, racking up a gaudy 408 total tackles for his college career which culminated with an extremely impressive stat line in 2021 (129 tackles (16 TFL) 3 FFs, 3 sacks, 1 INT). On the other hand, Rodriquez lacks the ideal size and length for the off-ball linebacker position at the next level, standing only at 5’11, 232lb with 30 1/8″ arms. This leads to Rodriquez to struggling to fend off blocks by offensive linemen who get on top of him in the run game. Still, there are plenty of flashes on tape where Rodriguez silences his critics with splash plays.

Malcolm Rodriguez hits on the pick-six, and #okstate is up a TD with 7 minutes left. Incredible. pic.twitter.com/hl6WfjxRUW

I had the opportunity to watch the DL/LB portion of the NFL Combine field workouts with NFL Network Draft Analyst Lance Zierlein who mentioned he was high on Rodriguez do to his instincts, athleticism, and competitive demeanor as a former wrestler. He mentioned that several teams are higher on him than the media, suggesting that he could be a name that ends up going higher than people would think come Draft Day. Still, Rodriguez fits the category of a sleeper as he has his measurables working against him, but the tape suggests that he could be a solid contributor at the next level with a team that allows him to stay clean and run to the football to make plays.

Finishing up some Combine LBs – here's a fun profile

Jackson was invited to the Senior Bowl earlier in the pre-draft process and had an up-and-down showing down in Mobile. Having only average size (6’1, 230lb), Jackson can struggle fighting off blocks as a run defender and can be inconsistent at filling gaps appropriately, suggesting a lack of overall instinctual awareness. However, Jackson has proven to be one of the best coverage LBs in this draft class, posting 14 PBUs during his time in college. In fact, Jackson is coming off his most productive season to-date, posting 119 total stops (56 solo), 20 TFLs, six sacks, a forced fumble, six PBUs, and an INT in 2021.

Jackson is expected to go somewhere late on Day Three or potentially be an UDFA, meaning he probably could be a value selection for a team looking for a player that is capable of playing both in man and zone coverage schemes at the off-ball LB spot. Throw in the fact that he should be a capable special teams demon with solid athletic testing numbers (4.55 40, 33.0″ vert, 10’4″ broad), Jackson could definitely be worth a late Day Three flier as a core special teams player that could earn reps in sub packages on defense with NFL coaching.

At the @SeniorBowl, D'Marco Jackson's 6 tackles (4 solo) tied for the team lead, and he added 1 QB hurry!

McClain fits the classic mold of the new-style tweener at linebacker, coming in at 6’0, 219lb. Due to his measurables, some teams will write him off as an undersized LB that will struggle playing against the run and fight off blocks. However, McClain plays with a fair amount of fire and can be a blur on the field despite his lack of timed speed (4.69 40), flying around and making plays displaying good pursuit of the ball as a run defender, pass rusher, and coverage defender.

Can snap off a block, stick face into a RB, run laterally, or quick trigger downhill/green dog blitz

He isn’t afraid to take on blockers head-on and fight through to make plays, but he also does a good job at times working through trash to make tackles in the run game. Still, his lack of desired size and inconsistencies due to going too fast at times without reading will likely result in him falling to the later rounds on the final day of the draft and potentially go undrafted. If a team is looking for a shot in the arm at the LB position and feel like they can reign in McClain’s erratic play to be a more steady contributor, he could prove to be a viable piece in the middle of the defense looking for a high-effort player that wants to run and hit everything in sight.

.@AuburnFootball LB Zakoby McClain (@RicochetRabbit) is a ‘tweener when it comes to size & position fit but active & instinctive players generally find a home on NFL rosters. Made a bunch of impactful plays like this getting to Ole Miss QB Matt Corral.#TheDraftStartsInMOBILE™️ https://t.co/1qReOCnKLh pic.twitter.com/8GUDJFMlLn