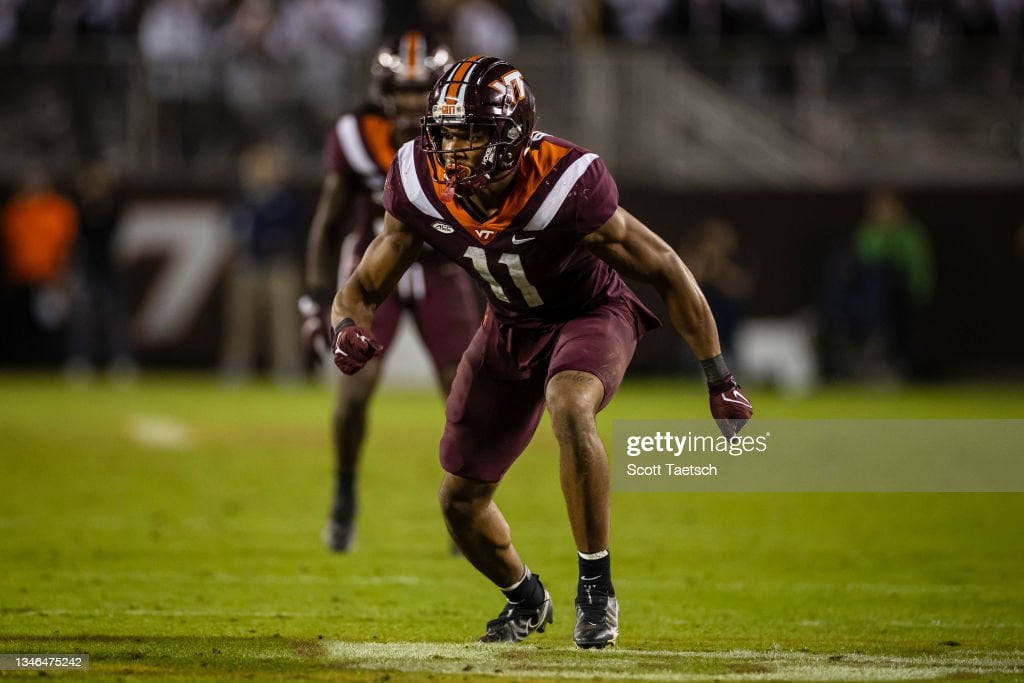 New to Steelers Depot, we will be highlighting a few less-heralded prospects at each position group in lead up to the 2022 NFL Draft that likely won’t go until Day Three, but present potential value as sleepers in the later rounds. This week we will be listing highlighting a few edge rushers that may not be getting the same name recognition as some of their peers but have the traits to develop into quality players at the next level.

I had the opportunity to coach Thomas back at Minnesota State University, Mankato prior to him transferring to North Dakota State while working in the Strength and Conditioning Department. Thomas stuck out as a man amongst boys at the D-II level and made the decision to head from one powerhouse program to another, leading the Bison with nine sacks to earn him all-conference honors and an invite to the East-West Shrine Game this spring in Las Vegas.

Brayden Thomas sacks the quarterback in the end zone and the Bison have a 21-0 lead over Towson late in the second quarter. pic.twitter.com/Ym4ebzcqbx

Standing 6’3, 259lb, Thomas has the size to play either as a standup 3-4 OLB or as a smaller base 4-3 DE at the next level. He best traits are his strength and quickness, having a strong get off on the snap of the ball and plays with the power to bull rush blockers back into the lap of the QB. Being a likely Late Day Three or UDFA, Thomas could be a name to watch as a guy who could make the end of a roster should he show himself useful on special teams and develop more as a pass rusher.

Nik Bonitto has been the Oklahoma edge rusher that has garnered all of the headlines, but is was actually Isaiah Thomas who led the Sooners with eight sacks last season. Thomas also boasts a better frame when projecting to the NFL, standing a long 6’5, 266lb with 33 1/4″ arms that played up and down the defensive front in Norman, lining up anywhere from the 3-technique all the way out to the technique out on the edge. His length and hand usage make him an intriguing pass rush prospect with even more room to grow at the next level.

Thomas needs to to improve his consistency at the point of attack as a run defender if he hopes to become more than a situational pass rusher in the league. However, he possesses the physical tools that you just can’t teach, and his upside along with his size and versatility as an inside/outside defender should have him get selected somewhere on Day Three of the 2022 NFL Draft.

Oklahoma DE Isaiah Thomas erupts into the backfield for a TFL in team. The Sooners have an absolute monster duo in Mobile. pic.twitter.com/6aBLj2j8LJ

Is it possible for a 6’5, 246lb edge rusher that has 34″ arms and ripped of a 4.36 40-yard dash time at the NFL Combine to be a sleeper? In the case of Virginia Tech’s Amaré Barno, that answer would be yes. Barno possesses the athleticism and measurables that you design your edge rushers to have in Create-A-Player mode in Madden, and there are glimpses on tape where that supreme athleticism paired with the length come off the screen.

The thing is with Barno, he is incredibly raw and has yet to develop basic fundamentals when it comes to hand usage, ability to set and edge, and a consistent motor from play to play. This will likely make Barno a Day Three flier someone takes a chance on due the the potential he possesses, knowing fully well that it may likely be a high ceiling, but low floor prospect that may fail to develop. Regardless, when a team is looking at one of their last picks in the draft and Barno is still on the board, he is a player you want to take a gamble on.

Amare Barno showing some juice in space
◾Initially is on the RB
◾ID's the QB scramble
◾Triggers down hill#NFLDraft #DraftTwitter pic.twitter.com/kRaHpcS1a1

Ali Fayad of Western Michigan took CFP by storm in 2021, posting 13 sacks on the season which was good for fourth overall in the FBS. Often touted as the best pass rusher in the MAC Conference, Fayad has developed into quite the pass rush specialist for the Broncos, accumulating 53 TFLs, 28.5 sacks, and eight FF across the span of five seasons as a redshirt senior.

The Broncos DL gets penetration on the broken play and Ali Fayad sacks Kenny Pickett to give WMU the ball deep in Panther territory! 41-34 Broncos in the 4Q. pic.twitter.com/9v2LbnxLuP

Standing at 6’2, 248lb, Fayad comes off as a tad undersized for the next level. He didn’t earn an invite to the NFL Combine, but he did show out in front of scouts at the East-West Shrine Game earlier this spring. Steelers Depot’s very own Devin Jackson actually got to interview Fayad and what he is particularly working on to hone his game as he transitions to the next level. Cut from a similar cloth as former Western Michigan Bronco and Pittsburgh Steeler Keion Adams, look for Fayad to get drafted somewhere on Day Three having a similar body type as Adams, but brings more to the table as a pass rusher who hopes to latch on with a team.

Who are the players #WMU EDGE Ali Fayad have been watching lately?

Former #Colts defensive ends Robert Mathis and Dwight Freeney. Here's Fayad explaining why he has been watching these two players in particular.

Ali Fayad. Helicopter. SACK. His bag is overflowing and I love it. pic.twitter.com/VZqcArRfw5