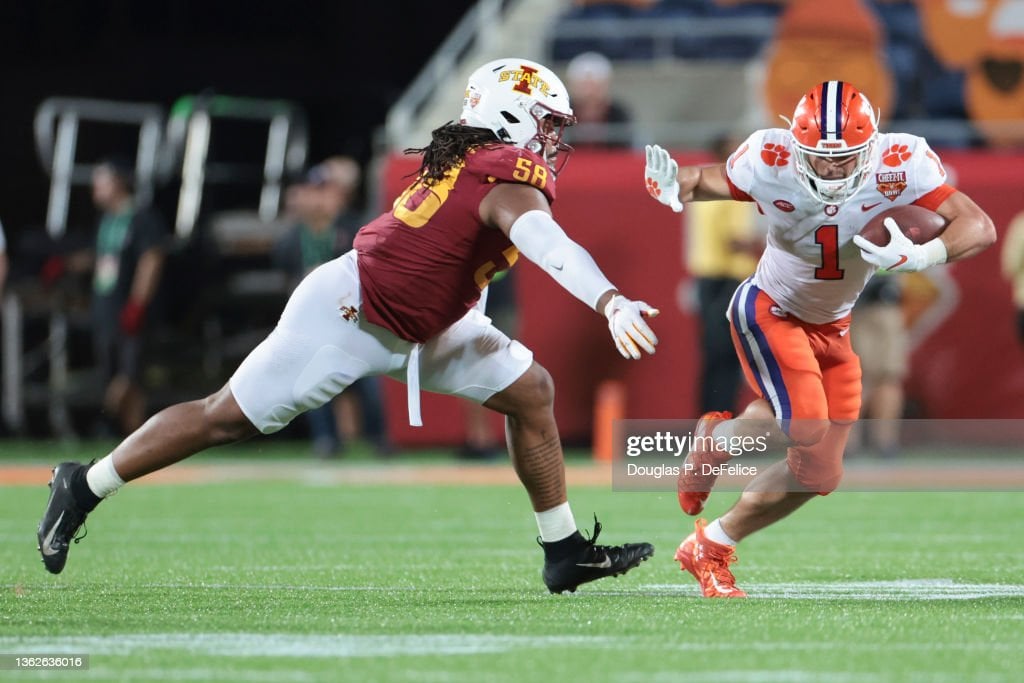 New to Steelers Depot, we will be highlighting a few less-heralded prospects at each position group in lead up to the 2022 NFL Draft that likely won’t go until Day Three, but present potential value as sleepers in the later rounds. This week we will be listing highlighting a few defensive linemen that may not be getting the same name recognition as some of their peers but have the traits to develop into quality players at the next level.

When I have the opportunity to bring up a prospect from Alex Kozora’s favorite school as often referenced on the Terrible Podcast, you better believe I’m going to capitalize on the opportunity. In all seriousness though, Noah Elliss from the Idaho Vandals is a behemoth of a defensive lineman that has been generating buzz amongst many in the scouting community since the Shrine Bowl. He boasts an enormous frame, standing 6’4 1/8″, but managed to drop from 359lb down to 346 for the NFL Combine. Despite his size, Elliss is deceptively nimble on his feet for a bigger nose tackle, having the quickness off the snap to be disruptive upfront as well as serve as a two-gap run plugger.

ID DT Noah Elliss (son of NFL DL Luther) can dominate his man and move, as you see here. 6'4" DT can play high, though, allowing OL to wall him off and doubles to move him. Could become more than a 2-down player, though, as he makes QBs uncomfortable in the pocket. #SnapScout22 pic.twitter.com/niwYTCixU2

Originally part of the 2017 recruiting class to Mississippi State, Elliss was deemed ineligible and ended up going to Idaho where his uncle, Luther, was the DL coach. Luther adopted Noah at a young age and has been coaching him since his youth, which can be beneficial considering Luther was a NFL All-Pro defensive lineman himself back in the day. Noah will have to work hard to keep his weight in-check as he transitions to the league, but his combination of strength and power at the point of attack to dominate against single blocks as well as his ability to penetrate gaps with his athleticism make him an intriguing Day Three option for a team looking for a value at nose tackle in the 2022 NFL Draft.

Noah Elliss (6’4” 365) w/ the knockback. @NoahE11iss keeps his feet active through contact, puts his blocker in the backfield & destroys the run play.

Elliss is one of 324 prospects invited to the 2022 NFL Combine! #stoptherun #govandals #nfldraft

If you are a regular listener to the Terrible Podcast, you probably have heard either Dave Bryan, Tom Mead, or myself mention Eyioma Uwazurike’s name a time or two. The Iowa State defender possesses impressive size and length (6’6, 316lb, 35 1/8″ arm, 10 1/8″ hand). While the size of a traditional nose tackle, Uwazurike would line up all over the LOS for the Cyclone defense, playing anywhere from the nose out to the 5-technique. He really came into his own this past season, posting 12 TFLs and nine sacks.

IASt DL Eyioma Uwazurike is 6'5", 310 lbs but looks like a 270-pounder on this play (and many others). Can play between the OGs and also 5T, standing up to double teams and working his way to the ballcarrier. Versatile, hard-nosed defender. #SnapScout22 pic.twitter.com/6688ulruuj

The big knocks thus far on Uwazurike are his pad level and his ability to stack and shed effectively to become a more consistent run defender. Still, given the man’s measurables and pass rush production at his size, he is a guy some time would be wise in taking a shot on during Day Three of the 2022 NFL Draft. Given his skill set and size, Uwazurike can likely be a fit as either a traditional nose or 4i/5-tech at the next level, making him a logical fit for the Pittsburgh Steelers who gush over defensive linemen that possess his measurables.

Look at Eyioma Uwazurike and Tyler Linderbaum go at it. Phew. pic.twitter.com/SdyQSLQQU9

You wouldn’t think that a defensive lineman from LSU would be a sleeper, right? Well, that is the case for Neil Farrell Jr., a 6’3 5/8, 330lb senior who has been seeing time since his true freshman season in Baton Rouge and became a full-time starter during the 2020 season. Farrell isn’t a great athlete (5.41 40, 21.5″ vert), but he does his job well as a run-stuffing 0/1-tech who has the strength and power to dominate single blocks on his own while also having the anchor to take on two blockers at once, thus allowing linebackers to run free to the football.

His play may often go unnoticed, but there is value in run-stuffing defensive linemen in today’s game still as Pittsburgh witnessed the value of that first-hand last season after losing the likes of Stephon Tuitt and Tyson Alualu to injury. Farrell reportedly had an informal interview with the Steelers at the NFL Combine, so there could be some interest there for the team to potentially select Farrell on Day Three of the draft should they not be certain in the status of Tuitt as they look to add another body into the room that can help shore up the run defense.

Neil Farrell Jr., two-gapping and making the tackle himself. As I said, very impressive against Bama. pic.twitter.com/BbVgd1Lb7F

While Steelers Depot was at the Senior Bowl, site contributor Jacob Harrison particularly took and interest to small-school product Eric Johnson from Missouri State. The 6’4 3/8, 302lb senior got invited to NFLPA Collegiate Bowl and dominated the competition there, earning an invite to the Senior Bowl just a week later. He as the requisite height and length (34 3/4″ arm, 83″ wing) that you want to see in a traditional 3-tech or 4i, and he plays with the pop in his hands to shock blockers back in his pursuit of the QB.

Sadly, Johnson’s showcase at the bowl games wasn’t enough to earn him and invite to the NFL Combine, suggesting that he will likely be a mid-to-late Day Three selection this spring. Given his power at the point of attack as well as his flashes of athleticism on tape, Johnson could be an ideal Day Three selection to fill the role as a 4-3 DT or a 3-4 DE where he can learn to develop those flashes into more consistent results, taking a redshirt year on the practice squad or as a reserve/rotational piece before seeing more time in the years to come as a contributor along the defensive line.

After seeing how much he flashed at both the @NFLPABowl, @seniorbowl, watching @MOStateFootball DL Eric Johnson II's film shows the same first step explosiveness he displayed in the all-star game circuit.