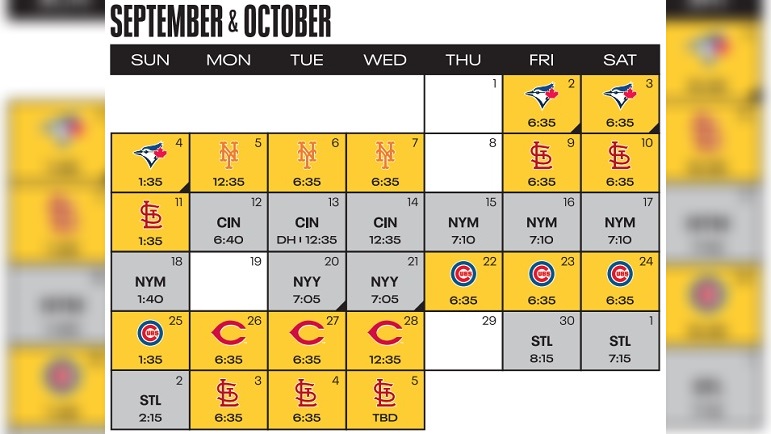 The NFL announced on Thursday that they will release the 2022 regular season schedule on May 12 and with that, there’s already quite a bit of speculation as to what the Pittsburgh Steelers’ slate of 17 games will look like by week. As usual, a lot of focus will be on when and where the Steelers’ 2022 Week 1 game will take place and with good reason. Why? Well, the Steelers have now gone seven consecutive seasons with their Week 1 game being played on the road.

While probability elements would easily lead one to believe that 2022 will finally be the year that the Steelers string of Week 1 road games will finally come to an end, the Pittsburgh Pirates schedule does suggest that might not ultimately be the case.

This season, the NFL’s first Sunday falls on September 11. The Pirates, however, are scheduled to host the St. Louis Cardinals at PNC Park in Pittsburgh at 1:35 p.m. ET on September 11. So, that likely means that if the Steelers are to host a Week 1 game in 2022, it would likely need to be a Sunday night or Monday night contest. While not unthinkable, a Sunday night or Monday night Steelers home game sure seems unlikely. It is worth pointing out, however, that the Pirates will be on the road on that Monday, September 12, so there is a little bit of hope. By the way, the Steelers last Week 1 Monday night home game was way back in 1977 and against the San Francisco 49ers.

If we are to assume that the Steelers will ultimately play their 2022 Week 1 game on the road, their opponent would be one of the Atlanta Falcons, Buffalo Bills, Carolina Panthers, Miami Dolphins, Philadelphia Eagles, Indianapolis Colts, Cincinnati Bengals, Cleveland Browns or Baltimore Ravens. It’s worth noting, however, that the Baltimore Orioles, Miami Marlins, and the Philadelphia Phillies all have home games scheduled for Sunday, September 11, so if the Steelers do play their Week 1 game on the road and on a Sunday, they are unlikely to face the Ravens, Dolphins, or Eagles due to the MLB team conflicts.

The chances that the Steelers would play either the Browns or the Bengals on the road in Week 1 would seem slim as well with both of those teams being within the AFC North division. If that’s the case, and assuming the Steelers Week 1 game is a Sunday afternoon road affair, that leaves the Falcons, Bills, Panthers, and Colts as possible opponents for them. The Steelers did open their 2021 season against the Bills on the road so odds are good we will not see a repeat of that. That would leave us with the Falcons, Panthers and Colts as probable options.

All of the above is of course wide speculation at this point and we’ll certainly find out for sure on May 12 when the official 2022 schedule is released by the NFL. Even so, be prepared for the Steelers streak of Week 1 road games to extend to eight just the same.