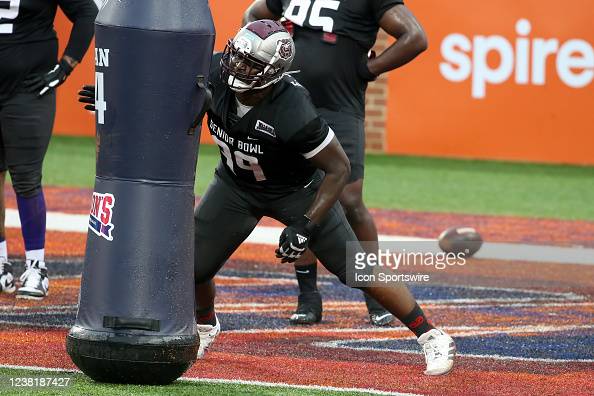 It’s not often the Pittsburgh Steelers dip their draft toe into the FCS waters. So when they show interest, it’s even more notable than usual. Pittsburgh is reportedly bringing in Missouri State DL Eric Johnson for a pre-draft visit April 18th, per this tweet from Pro Football Network’s Aaron Wilson.

A decorated player from the MVFC, he ended his 2021 season by putting up 43 tackles (6.5 TFL) with 1.5 sacks and a whopping three blocked kicks. According to PFN, Johnson – who went to the Senior Bowl but wasn’t invited to the Combine – weighed in at just under 6044 and 299 pounds with 34 1/4-inch arms at his recent Pro Day. Testing well, he ran a 4.88 with a 1.70 ten-yard split along with a 4.53 short shuttle time. The NFL took notice, and Wilson reports Johnson has a slew of visits coming up, with at least six other teams scheduling visits throughout this process.

He also played in the NFLPA Bowl, recording a sack.

In Dane Brugler’s draft guide, he ranks Johnson as the 13th-best interior defensive lineman, praising his “lateral movement skills” and durability, not missing a game in his entire college career. He does not Johnson must do a better job keeping his pad level down and keep his eyes on the football. Brugler’s evaluation put a fifth-round grade on Johnson.

It’s unclear if Pittsburgh had someone at his Pro Day workout.

Johnson is regarded as a Day 3 selection who probably won’t hear his name until Saturday. But Pittsburgh’s interest in a small-school player is notable. They don’t often draft players below the FBS level. The last defensive lineman they took from that level was Javon Hargrave back in 2016.

We’ll have a full report on Johnson prior to this April’s draft.