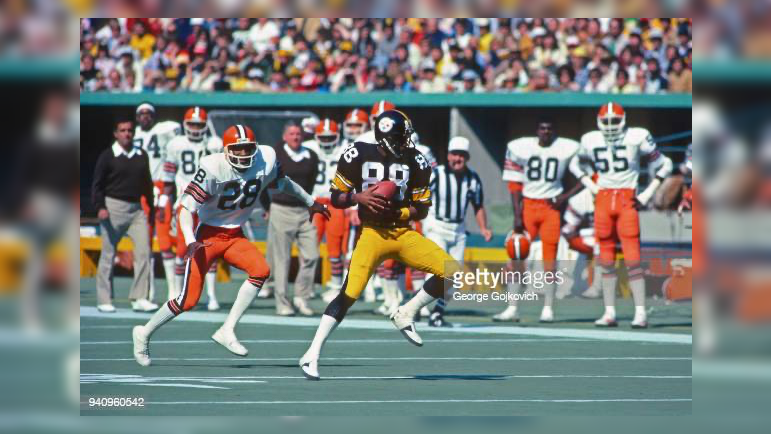 As an unanimous All-American at the University of Southern California in 1973, Lynn Swann was expected to be a first round draft pick in the 1974 NFL Draft.

What nobody truly expected of all the first rounders in the 1974 NFL Draft was for Swann to be the lone Hall of Famer of the group that featured Ed “Too Tall” Jones, Randy Gradishar, Heisman Trophy winner John Cappelletti, John Dutton, and Henry Lawrence.

That’s exactly what Swann went on to become though as a member of the Steelers’ famed Class of ’74, which featured future Hall of Famers in Jack Lambert, John Stallworth, Mike Webster, and undrafted free agent Donnie Shell.

Drafted at No. 21 overall, Swann is considered one of the top 5 players in NFL history ever picked in that draft slot, according to CBS Sports’ Cody Benjamin.

Swann finished his career with 336 career receptions for 5,462 yards and 51 touchdowns, helping the Steelers win four Super Bowls in the 70s while earning three trips to the Pro Bowl, two Second Team All-Pro honors and one First Team All-Pro accolade before being enshrined in Canton in 2001.

“Look at his numbers today, and they don’t necessarily pop. But during his era, he helped pace receiving production as one of the top targets on a Steelers dynasty. A major piece of one of the best draft classes in team history — the same one that produced greats like Jack Lambert, John Stallworth and Mike Webster — Swann made an impact from the jump and never let up. After leading the NFL in punt return yardage as a rookie, he established himself as a No. 1 wideout and became one of the most productive pass catchers in Super Bowl history,” Benjamin writes.

“A three-time All-Pro and Pro Bowler, Swann didn’t lead the NFL in catches or receiving yards more than once (his 61 receptions for 880 yards ranked first in 1978), but he gets a boost on this list for how good he was when it mattered most. A 2001 Hall of Fame inductee, he was crowned Super Bowl X MVP for dropping 161 yards and a touchdown on the Cowboys in a title-winning effort. He also retired with the most all-purpose yards (398) in Super Bowl history, claiming three other Lombardi Trophies in Pittsburgh. A member of the NFL’s 1970s All-Decade Team, he had five 700+ yard seasons from 1975-1980, peaking as a deep threat in 1979 when he averaged nearly 20 yards per catch.

That about sums up Lynn Swann perfectly. The numbers — especially today — aren’t eye-popping overall, but he constantly showed up on the biggest stage and made the biggest plays as part of the Steelers’ dynasty. In a run-heavy offense along with sharing targets with a fellow Hall of Famer in John Stallworth, Swann produced quite well for the area, as Benjamin laid out.

While Swann was terrific, Moss is arguably the greatest receiver in NFL history, right there with Jerry Rice, so it makes plenty of sense as to why Moss is Benjamin’s best player ever drafted at No. 21 overall.