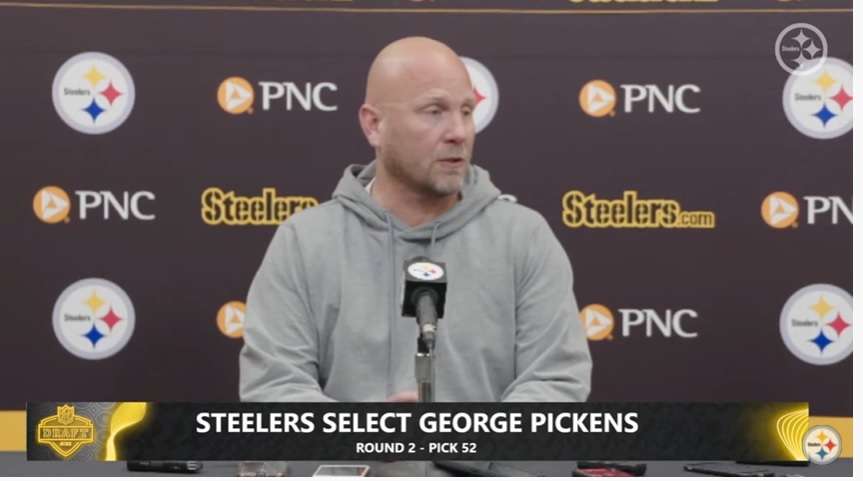 If you want to sum up what the Pittsburgh Steelers are getting with WR George Pickens, it’s first-round talent gotten in the second round. Pickens likely would’ve heard his name in the Top 32 had he not torn his ACL last March. It severely limited him in 2021 but he came back for the Bulldogs’ National Title Run.

Speaking at a post-pick press conference after the pick was in, Matt Canada says the Steelers have been high on Pickens for quite some time.

“Super excited about George and the draft pick we got,” Canada told reporters via the team’s YouTube channel. “Coming out of last year as we began early draft prep, we thought maybe he was the best wideout coming out. He had a tough injury there through the spring. Showed great battle in coming back and played late in the year for them.”

Pickens had a strong 2020 season for the Bulldogs. He didn’t catch a lot of passes in a run-centric offense but made them count, averaging 14.6 yards per catch on 36 receptions and finding the end zone six times. As a freshman, he recorded eight touchdowns on 49 receptions. Pickens got back on the field in late November, recovering from his ACL tear in record time, and caught a 52-yard catch in the National Title game to beat Alabama.

Pickens ultimately became a mid-second round selection and lower on the list of receivers taken in this class. But the injury may present value and a steal for the Steelers.

His overall production may be light, just 90 career carries, but he’s shown great athleticism and fluidity for his long frame. Pittsburgh kept tabs on him after the injury and sent the house to Georgia’s Pro Day for the many draft-eligible Bulldogs. WRs Coach Frisman Jackson put Pickens through his Pro Day workout, one Canada called impressive and showed no signs of a receiver one year removed from injury.

Pickens should make an impact right away. Canada told reporters Pickens is capable of playing in the slot or on the outside. In 11 personnel, Pickens, Diontae Johnson, and Chase Claypool should all be on the field. The Steelers are investing heavily in their offense over the last two drafts. The 2021 draft went offense for their first four picks, something that hasn’t happened since 1984, and the team’s top two selections this year have been on offense with QB Kenny Pickett and now Pickens.