The Pittsburgh Steelers are reportedly re-signing safety Terrell Edmunds to a one-year, $2.5 million contract, and the team should be making that transaction official in the next several days. With that, we now have another update point of where the team currently sits at from a salary cap perspective.

Entering Tuesday, the Steelers were $11,610,917 under the cap following the claiming of wide receiver Miles Boykin off waivers several days ago. Assuming the re-signing of Edmunds at $2.5 million does indeed take place, he will enter the Rule of 51 with that salary and displace a charge of $895,000 in the process. In short, Edmunds’ re-addition will use $1.605 million of salary cap space. That move will leave the Steelers $10,005,917 under the cap in real-time.

Once again, let me remind everyone that the unfortunate and tragic passing of quarterback Dwayne Haskins has yet to be addressed on the NFL’s financial side, and as I posted previously, that’s not too surprising with that still being a fresh event. At some point, Haskins’ will likely be removed from the list of players under contract with the Steelers by the NFLPA. That hasn’t happened yet and might not happen for several more weeks.

Prior to his passing two weeks ago, Haskins was set to earn $2.54 million on an original round restricted tender, which is not guaranteed. When and if Haskins’ salary is removed from the Steelers Rule of 51, it will be displaced by a $895,000 salary, and thus the Steelers will gain back $1.645 million in 2022 salary cap space.

The re-signing of Edmunds won’t likely hit the NFLPA site until the middle of next week, as the Steelers have yet to even announce the transaction. 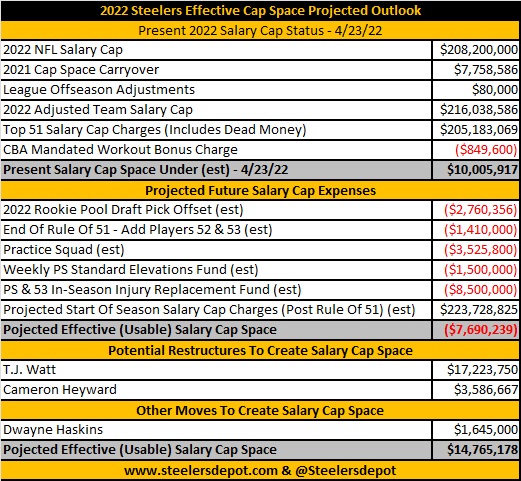