The Pittsburgh Steelers officially announced the singings of linebacker Genard Avery and safety Karl Joseph on Thursday and with that, we now have a real good picture of where the team currently sits at from a salary cap perspective as both deals have now been file with the NFLPA.

With the Avery and Joseph contracts now fully accounted for, the Steelers are now $13,255,917 under the cap with nothing outstanding at this point with their Rule of 51 number. That number matches the NFLPA number on Saturday morning with all 74 players under contract. While that’s not enough salary cap space to handle future costs the team will have moving past free agency, it is enough room to make several more signings with.

Realistically, we could still see the Steelers sign a veteran wide receiver and safety in the next few weeks. We might also see the team continue to re-sign a few of their own unrestricted free agents between now and the draft. To date, the Steelers have several of their own unrestricted free agents that remain unsigned. That list of players includes cornerback Joe Haden, tight end Eric Ebron, guard Trai Turner, safety Terrell Edmunds, quarterback Joshua Dobbs, guard/center B.J. Finney, outside linebacker Taco Charlton, and running back Kalen Ballage.

Obviously, the Steelers will still have future costs they will need to accommodate as they move along deeper into the offseason. Restructuring the contract of outside linebacker T.J. Watt should easily accommodate those future costs. The team might not even need to do a full restructure on Watt to boot. Restructuring the contract of defensive tackle Cameron Heyward can be done later in the offseason should a need arise but that’s unlikely to happen at this point.

So, just how much salary cap space have the Steelers used so far this offseason after making their signings and cuts? Well, the team was $28,829,229 under the cap on March 10 when the workout placeholder charge hit. Since then, the team has issued three restricted tenders, one exclusive rights tender. Additionally, the team has re-signed six of their own free agents and signed seven outside free agents. The team has also terminated the contracts of two players. With the team now $13,255,917 under the cap, just $15,573,312 in salary cap space has been used after all roster displacements have taken place.

Below is my most current breakdown of the Steelers salary cap situation as of Saturday morning. Included in that breakdown is an updated look at estimated forthcoming costs the team will have. 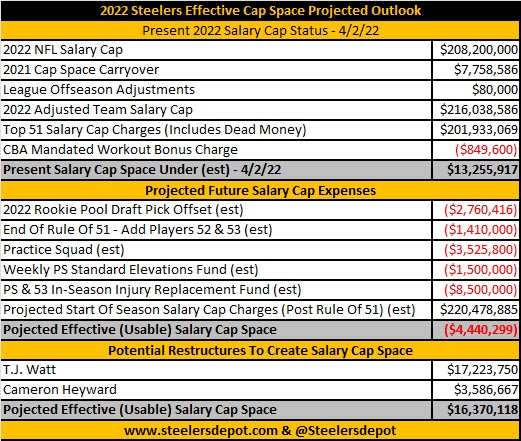