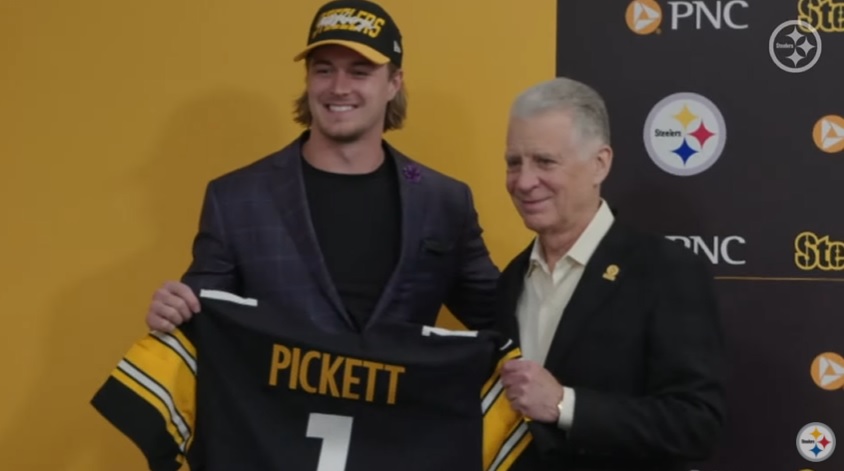 Pittsburgh passed on Dan Marino in 1983.

They wouldn’t pass on another Pitt quarterback this time around.

Of course, the odds of Kenny Pickett becoming the next Marino are low, and it’s a merely an interesting footnote in the Steelers’ selection. Still, in introducing Pickett to the media Friday, Steelers’ Team President Art Rooney II mentioned Pickett’s college accolades.

“It’s also something for me to be able to say that we drafted somebody who broke all of Dan Marino’s records in college is pretty special,” Rooney said in his opening remarks as carried by the team’s YouTube channel. “You all know the number awards that Kenny has won, Heisman Trophy finalist.”

Pickett surged in 2021. After never throwing for more than 13 touchdowns in a season, he broke out with 42 of them in 2021 while reducing the number of interceptions he threw, nine in 2020 to just seven last year, despite 150+ more attempts. Pickett finished his Pitt career as the school’s all-time leader in every major passing category: completions, yards, and touchdowns, while finishing second in completion percentage. Marino had been passed by previous quarterbacks in completions and yards, but his touchdown record stood until late in 2021 when Pickett surpassed him. Pickett finished his Panthers’ career with 81 touchdowns. Marino had 79.

Pittsburgh had the chance to draft Marino in 1983 at the end of Terry Bradshaw’s career but they passed to take DT Gabe Rivera instead. Rivera was regarded as a talented player, but his career ended after being paralyzed in a car accident during his rookie year. Marino went on to become one of the greatest QBs of the modern era and earned his place in the Hall of Fame.

Though Rooney rattled off the individual accolades, he knows as well as anyone the goal is to win as a team. That’s what gets remembered.

“Team goals are the ones that count and Kenny led his team to a championship this season. That’s what we’re looking for here. To win a championship.”

Pickett led the Panthers to an ACC Title this past season and captured the team’s first 11-win season since Marino did it in 1981. Pittsburgh will look for Pickett to do the same with the professional team. A talented quarterback is necessary to compete in an AFC full of them.