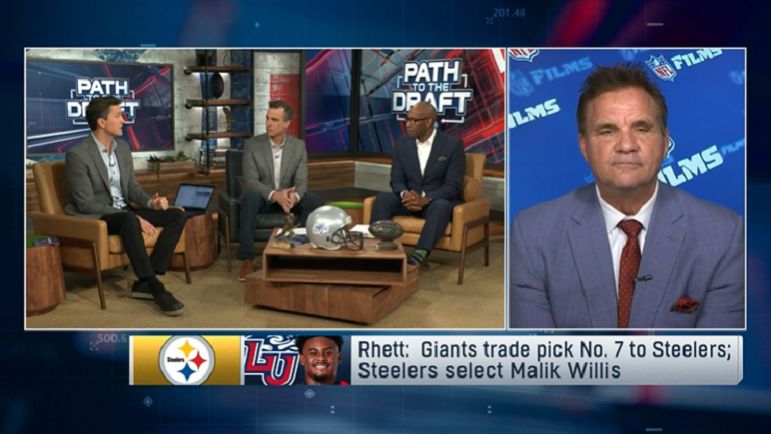 The Pittsburgh Steelers are going to make a bold trade up in the first round to go get their quarterback of the future. At least, that’s what a lot of sportswriters around the country would like people to think, if it gets them to click on their articles and videos. But hey, maybe it actually happens.

Rhett Lewis was the latest to suggest that the Steelers will make a significant trade up in the draft to get a quarterback during a recent ‘Path to the Draft’ segment with Daniel Jeremiah, Brian Baldinger, and Bucky Brooks, each proposing a potential trade to watch for. Lewis offered the following proposal:

Think about this scenario: Panthers take the first quarterback off the board at number six, and a team that wants to get ahead of the Falcons…just in case Atlanta was gonna take a quarterback, the Steelers come up to number seven to get Malik Willis.

So what would it cost for the Steelers to move up from pick number 20 all the way to pick number seven (which is owned by the New York Giants, their second of two first-round picks)? Well, Alex Kozora has already laid out a plausible scenario for just such a hypothetical, wagering that it would cost them two first-round picks (their 2022 first and their first next year).

And for that, they get Malik Willis, one of the rawest first-round quarterback prospects in many years, but who has the highest upside of any in this particular class. The Malik Willis who played last season is not worth a first-round pick, but that’s not what you would be drafting him for. You would be drafting him for who he might be in 2024—or 2023 if you’re lucky.

I personally am not a gambler. I wouldn’t take that risk on a player who has such a disparity between where he is now and where he would have to be to make that move worth it. But it’s not my money, and it’s not my job, and my opinion doesn’t make a difference.

What matters is whether or not general manager Kevin Colbert, head coach Mike Tomlin, and owner Art Rooney II feel strongly enough about Willis to want to draft him—and how eager they are to draft him, how much risk they are willing to face about possibly losing him out to another player.

Because chances are they’re probably not the only quarterback-needy team who would potentially be looking to move up to seven. The reality is that we almost always see a run on quarterbacks, which isn’t a surprise given the significance of the position.