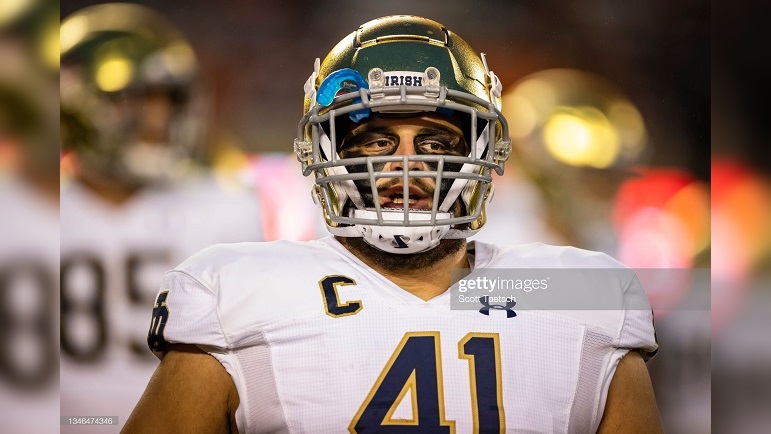 The Pittsburgh Steelers will likely have several draft hopeful players deemed as local products in for pre-draft visits this offseason. We already know that Pittsburgh quarterback Kenny Pickett has had one such visit, and now we know that a Notre Dame product with ties to Pittsburgh has already been in to talk to the Steelers, as well.

According to a Thursday report by Brian Batko of the Pittsburgh Post-Gazette, Notre Dame defensive lineman Kurt Hinish has had a pre-draft visit with the steelers as a local area player.

In five years at Notre Dame, Hinish played in 61 total games on his way to registering 83 total tackles, of which 20 resulted in lost yardage. He was also credited with 7.5 total sacks and one forced fumble during his college career. He was a team captain at Notre Dame.

Hinish, who projects as a defensive tackle or nose tackle at the NFL level, talked to Balko about his pre-draft visit with the Steelers

“It was cool, man. I went to school in the city, watching games on Sunday, watching the Steelers win those Super Bowls when I was a kid,” Hinish told Balko. “But at the end of the day, it’s business. I wasn’t really fanboy-ing out. It was just more of a business trip than anything else.

“Obviously, I’d love to stay home and play for Pittsburgh, but if they don’t think I’m right for their system, that’s up to them and I’ll go somewhere else.”

Hinish is likely to go undrafted this year, and if he does, there’s a chance the Steelers might sign him as a free agent in early May.