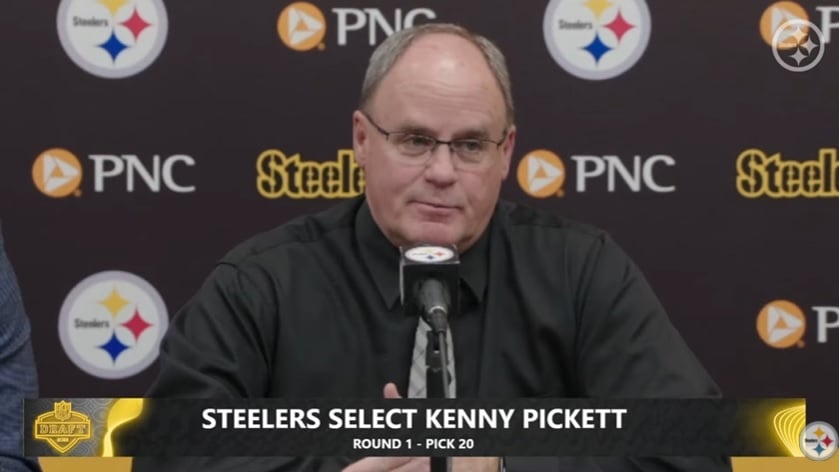 At the time Thursday night into early Friday morning, that team the Steelers tried to trade up with was unknown.

It all became clear Friday morning as Houston Texans’ GM Nick Caserio revealed that the Texans had a chance to trade down to No. 20 overall with the Steelers before deciding to stand pat and select Texas A&M interior offensive lineman Kenyon Green.

Nick Caserio says the Texans had a chance to move from No. 15 to No. 20 (Steelers), but they were going to miss out on a group of players they liked and it made most sense to take the pick there.

There you have it.

That mirrors what Colbert said Thursday night after the selection, stating to reporters that the Steelers made some calls but were unsuccessful moving up.

“Yeah, we made some calls. We did. But that’s not unusual,” Colbert said, according to the official transcript from the press conference. “We’ll make some calls. We had people calling us from the bottom. We had people that we knew were interested in maybe trading down to our spot and us trading up. So, we go through that process almost every round.”

With all the top quarterbacks falling to them into the 10-20 range, the Steelers attempted to trade up to ensure they were able to secure their top choice, which obviously happened to be Pickett. In the end, though, with no deal transpiring, things worked out in the Steelers’ favor, as the New Orleans Saints passed on Pickett one final time, dropping him into the lap of the Steelers, making Colbert and head coach Mike Tomlin very happy in the end.

What a trade package to move up to 15 in the 2022 NFL Draft would have looked like we’ll obviously never know, but it’s clear the Steelers were trying to be aggressive to go and get their guy in Pickett.