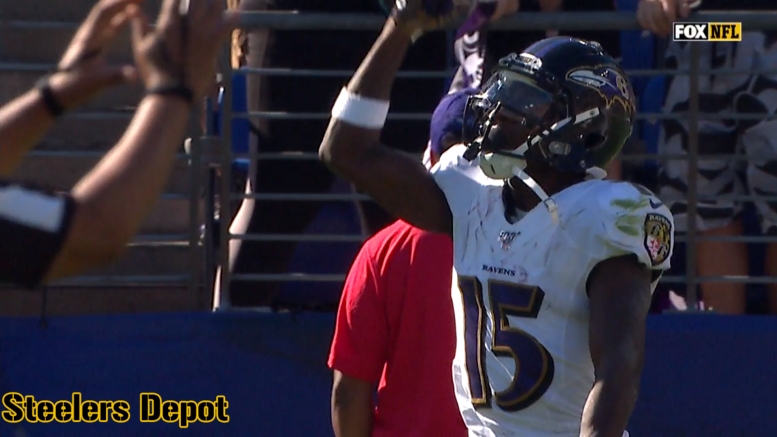 The opening night of the draft has sure been active, with a flurry of trades taking place outside of the top 10 selections, including three in a row. The Baltimore Ravens, sitting at 14, did not trade up, but they did end up in the mix, trading former first-round wide receiver Marquise Brown and sending him to the Arizona Cardinals.

According to Field Yates, the move was to get back into the first round, adding the Cardinals’ 23rd overall selection, in exchange for both Brown and the 100th overall selection, a compensatory draft pick that they received last year for the loss of coach David Culley when he was hired by the Houston Texans as head coach—and then fired after one season.

The Ravens just traded WR Marquise Brown and pick 100 to the Cardinals for pick 23, per source.

Baltimore was one of the favorite teams to be expected to trade up in this draft class, but many of their preferred targets quickly went off the board, particularly with a run on edge rushers and cornerbacks early. The Philadelphia Eagles then traded in front of them to 13 to draft defensive lineman Jordan Davis.

They ended up taking probably the best player available when they selected, safety Kyle Hamilton, even though they spent big money on the safety position in free agency with Marcus Williams from the New Orleans Saints. Williams and Hamilton will pair with cornerbacks Marcus Peters and Marlon Humphrey, a pair of All-Pros who are returning from injury.

With Baltimore moving Brown, of course, one might assume that their target for their second pick in the first round will be a wide receiver, and that’s a distinct possibility. They have last year’s first-round pick, Rashod Bateman, ready to take on a full-time starting job, supplemented by Devin Duvernay, Tylan Wallace, and James Proche.

Earlier this offseason, they waived 2019 third-round draft pick Miles Boykin, whom the Pittsburgh Steelers claimed off waivers. Their wide receiver depth chart is obviously thinning, and voluntarily, clear hints of their intentions to address the position over the weekend. They also have four picks in the fourth round.

Brown, who is the cousin of former Steelers wide receiver Antonio Brown, was drafted as the top receiver in the 2019 class with the 25th overall pick by the Ravens, even though he was coming off of a foot injury. In 46 games over three seasons, he caught 195 passes for 2,361 yards and 21 touchdowns. He recorded his first 1,000-yard season in 2021 with by far a career-high 91 receptions, but his only scored six times.

Brown was teammates with Cardinals quarterback Kyler Murray in college. The Cardinals just picked up Murray’s fifth-year option, though the quarterback has recently caused a bit of a disruption in an effort to get a new contract.