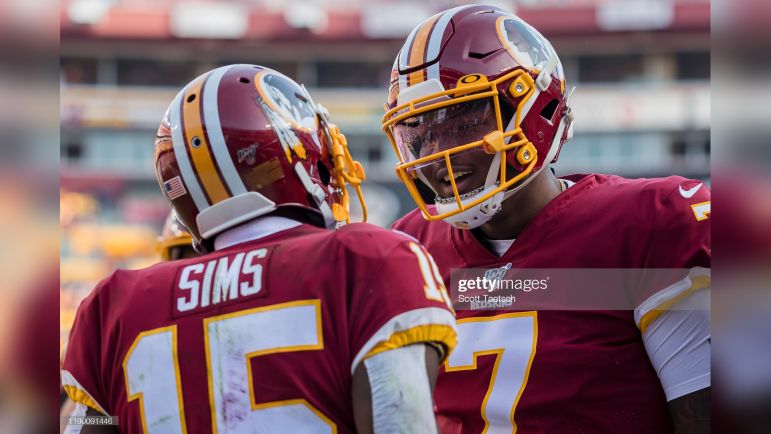 Earlier this month, the Pittsburgh Steelers suffered through the tragedy of losing one of their own. While returning home from working out with teammates in Florida, fourth-year quarterback Dwayne Haskins was struck and killed by a vehicle while attempting to cross a highway, purportedly after having run out of fuel.

The incident has left a hole in the lives of those who knew him, and in Pittsburgh, perhaps nobody knew him better than wide receiver Steven Sims, who spent the 2021 season on the Steelers’ practice squad while Haskins was on the 53-man roster. Both of them came to Washington in 2019, the quarterback via the first round out of Ohio State, the latter as a college free agent via Kansas.

Outside of the time between Haskins’ release from Washington at the end of the 2020 season and Sims’ signing to the Steelers’ practice squad at the beginning of the 2021 season, the two had spent their entire professional careers together, and remained close through that entire process.

Sims spoke yesterday at a memorial service for his good friend, and gave some very thoughtful and heartfelt remarks about what kind of person Haskins was and about their bond that they shared, which I thought would be worth sharing to the Steelers faithful who frequent our community, so I’ve transcribed it below, from a video provided by Darren M. Haynes for WUSA9.

Dwayne was not just a friend to me. He was not just a teammate. Dwayne was my brother. Every time Dwayne walked into the room, you always felt his positive energy, from laughing and joking, playing around, and just how he loved old-school music.

Dwayne was filled with love, and he was filled with life. He truly had a heart of gold. Who would have thought, sitting there in Florida, having a drink, laughing with you, that would be my last time seeing you? I will hold all of our memories near and dear to my heart.

Our rookie season at Washington, Dwayne opened his home to me as I searched for a place to stay. He wouldn’t even allow me to repay him. There are people that you grow up with all your life that wouldn’t do anything for you, and Dwayne was willing to give his shirt off his back for someone he just met.

Dwayne was a man of high character. He wanted nothing best for the ones around him. I’m just thankful to have had a bond with Dwayne, and got to play with him and be a teammate with Dwayne for the four years that we played in the NFL. He threw me my first NFL touchdown.

You’re a big part of the reason where I am today. You’ve been with me every step of the way, Dwayne. In this journey, we’ve shared so many memories I could never forget. We reunited in Pittsburgh, and we always talked about our plans, how we were going to come back stronger than ever. I will never forget all the long talks about life and the extra reps after practice. I got you from here, brother. Rest up. I love you, Dwayne. Until we meet again.

The Steelers signed Haskins to a Reserve/Future contract in January 2021. He served as the third quarterback last season behind Ben Roethlisberger and Mason Rudolph, but was hoping to work his way up the depth chart this year and re-establish himself as the first-round pick he was drafted to be. Sims, after spending a year on the practice squad following his release from Washington, was also hoping to redeem himself and get back to being a regular contributor.

Now, he will be driven even harder as he hopes to fulfill his part of the dreams he and the man he calls his brother shared through many a long talk about life and football. While Haskins’ journey was tragically cut short, his influence may still live through those he touched in life.