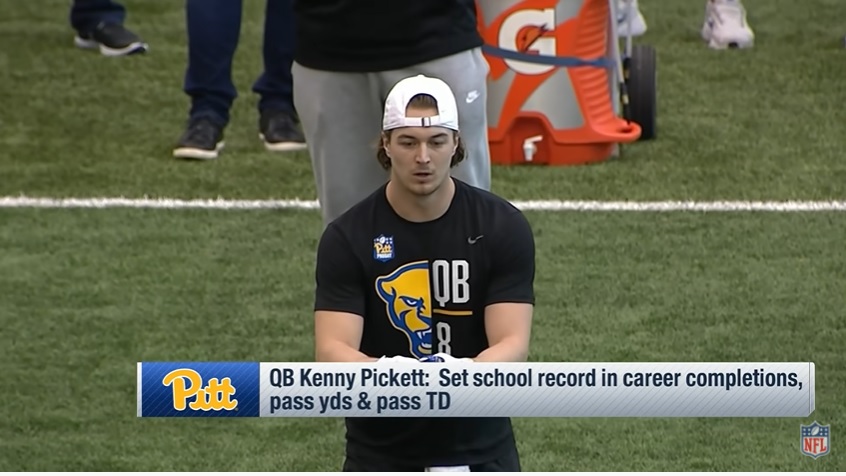 The Pittsburgh Steelers have already shown how confident they are in Kenny Pickett. While they had their pick of every signal caller, they opted to make the former Pitt quarterback the only one selected in the first-round. The Steelers noted Pickett’s decision to return to Pitt and the added year he had to mature as one of the most important factors when it came to rating him as their No. 1 quarterback in the class. General manager Kevin Colbert and coach Mike Tomlin were also attracted to the way he carried himself during their interactions.

But from Pickett’s perspective, he said he never lost confidence in any of the teams that had shown interest, including the Steelers, no matter what kind of off-the-wall offseason moves were made. He was asked about his mentality throughout the draft process in his conference call on Thursday.

“I’m going to be honest, every interview, every encounter that I had, there was not one encounter that I turned down,” said Pickett via a team transcript, speaking on whether or not he crossed the Steelers off his list after the free-agent signing of quarterback Mitch Trubisky. “I took care of every opportunity that was there because I want to be the best, and I felt like any team interacts with me would have that feeling that I was the guy to go with. So, I wanted to make sure that I took every interview, every visit, anything I could possibly do to help myself in this process, I would do. I didn’t care what any team was doing in free agency, what rumors I was hearing. I just wanted to put my best foot forward with that team.”

Pickett certainly put his best foot forward when it came to impressing the Steelers. Sure, it’s entirely possible the occasional interactions he had with Tomlin in and around the facility over the last five years helped his cause. But more than that, the front office led by Colbert stresses the importance of how a player handles himself when talking to coaches on the sideline or how he interacts with his teammates.

Looking back now, it’s obvious no one was happier than Colbert and Tomlin whenever the Steelers’ newest addition decided to stay in school for another season. It’s also apparent now that Pickett realizes just how crucial it was to his future.

“I just think the experience of playing games and having starts under my belt, I think that really helps, seeing a lot of different defenses, playing a lot of different levels of competition,” said Pickett on the advantages of having an extra year in school. “So, I think it’s just only going to help me at the next level. I’m just excited to finally fulfill my dream and go relentlessly at this goal of winning a championship.

The Steelers’ front office is really happy too, seeing as they didn’t hesitate to make the city his home for the foreseeable future.