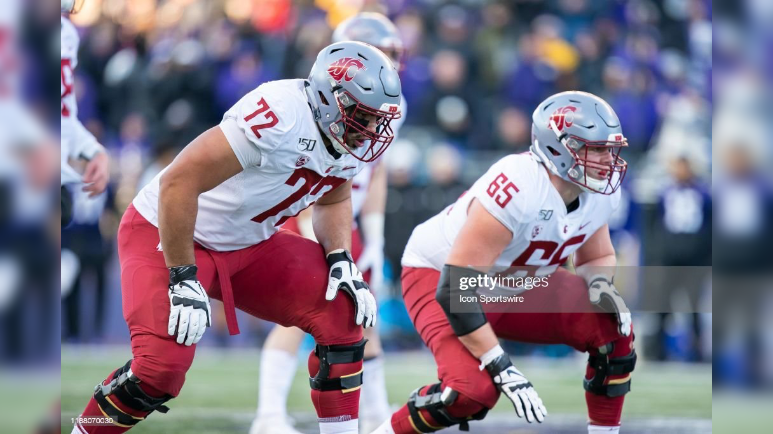 One night after grabbing hopeful franchise QB Kenny Pickett out of Pittsburgh at No. 20 overall in the first round of the 2022 NFL Draft, the attention for the Pittsburgh Steelers, General Manager Kevin Colbert, and head coach Mike Tomlin shifts to Day 2 of the NFL Draft in Las Vegas.

While the Steelers are ecstatic that they landed their man under center for the foreseeable future, there’s still plenty of talent overall on the board remaining, putting the Steelers — and the rest of the NFL in general — in great position to add more sound talent to rosters Friday night.

After landing a quarterback at No. 20 overall, could the Steelers address the offensive line on Day 2 at No. 52 overall in the second round? Pro Football Focus seems to think so, tabbing Washington State offensive lineman Abraham Lucas as the Steelers’ ideal target on Day 2.

This rep from Washington State tackle Abraham Lucas shows the importance of footwork to mirroring. The defender is boxed out, and Lucas hasn't even put his hands out. pic.twitter.com/ctvLaEyiTL

“The Steelers devoted some resources to their interior offensive line in free agency with James Daniels and Mason Cole additions, but Dan Moore Jr. and Chukwuma Okorafor remain the projected starters at tackle,” PFF’s Ben Linsey writes. “That’s a position group that could use some additional competition at the least. Lucas is a battle-tested pass protector who earned 85.0-plus PFF pass-blocking grades in three of his four seasons with the Cougars.”

The Steelers at least have some knowledge of Lucas, as Mark Bruener was at Washington State’s Pro Day in early April, though the Steelers did not meet with him at the NFL Scouting Combine in Indianapolis.

I perused some 2022 NFL Mock Drafts this AM out of curiosity, and one player I don’t see high enough is @WSUCougarFB OT Abraham Lucas.

32 career starts, great athlete at 6’7, incredibly hard worker, and has range and bend to be a high-level NFL starter. pic.twitter.com/fjT4zFWvGa

Lucas certainly has a strong profile as a high-level pass protector, but based on the Steelers’ interest level pre-draft, it’s hard to envision Pittsburgh having much interest overall in drafting the Cougars’ standout linemen.

Colbert has talked extensively about this being a deep draft class at offensive tackle, so grabbing one in the second round would be a bit of a reach, based on his comments throughout the pre-draft process.