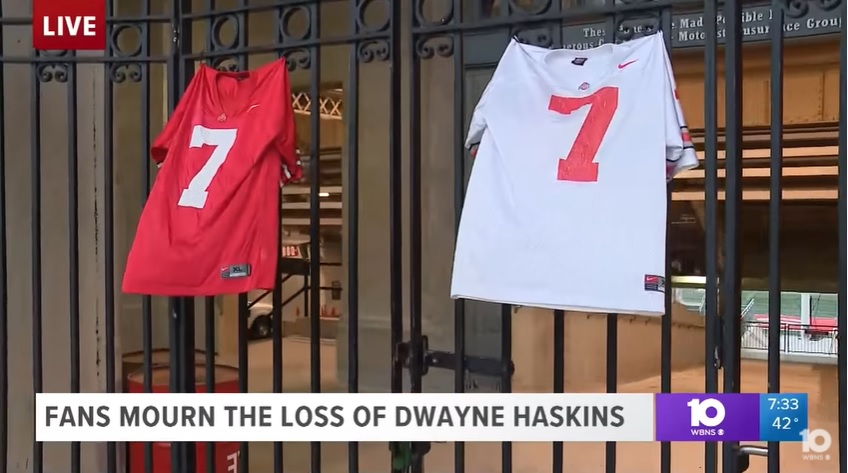 Though gone far too soon, Ohio State head coach Ryan Day knows the tremendous legacy Dwayne Haskins leaves following his 24 years on this Earth. In a Monday press conference reacting to the news of Haskins’ death, Day spoke to what Haskins meant to the program and the impact he had on those who knew him.

“He left a legacy even at 24 years old,” he told reporters this morning in a 31-minute presser. “And I think that it says so much about who he was as a person because of that. I just think the outpouring of support shows what type of special person he was.”

A countless number of friends, family, teammates have shared wonderful memories and stories of Haskins. Almost all of them remembered his kindness, positivity, and smile, something Day will never forget.

“He worked really hard. He put a lot of extra work in the offseason. I would say that’s probably, just again, always thinking about others, compassion, that infectious smile, the old soul. Those are the things that come to mind.”

Haskins arrived at Ohio State after initially committing to Maryland, but a head coaching change there led him to re-open his commitment. He served as just a one-year starter for the Buckeyes but had a spectacular season, throwing 50 touchdowns while leading the Buckeyes to a Rose Bowl victory, of which Haskins was named its MVP. It led him to be drafted 15th overall in 2019, and after two seasons in Washington, the Steelers signed him.

That opened the door for Justin Fields and C.J. Stroud to step in. Fields himself became a first-round pick in 2021 while Stroud is well on his way to joining that club. Even if Haskins wasn’t directly on the roster, Day said he had an influence on both of those men.

“He was kind of a big brother to those guys, to Justin, I think even C.J. When you come through Ohio State and you play the position and you kind of walk in those shoes, only a few people quite understand what that’s like. He was a great resource for those guys, And I know he and Joe [Burrow] stayed in touch and know those guys, were friends and they competed. But they had so much respect for each other. And so it’s a little bit of a tight group there because it’s such a unique position.”

Your legacy will live on big bro 💯 https://t.co/Yz72G0rNhj

Haskins was beloved by Ohio State. Following his death, and as seen in the article photo, fans hung jerseys and brought flowers outside the stadium. The Buckeyes plan to honor him during their upcoming spring game, and it’s likely the Steelers will find a way to remember him during the season.

His life certainly impacted so many lives and in so many different places. Like those a part of the Pittsburgh Steelers, the rest of the football world will grieve his loss.