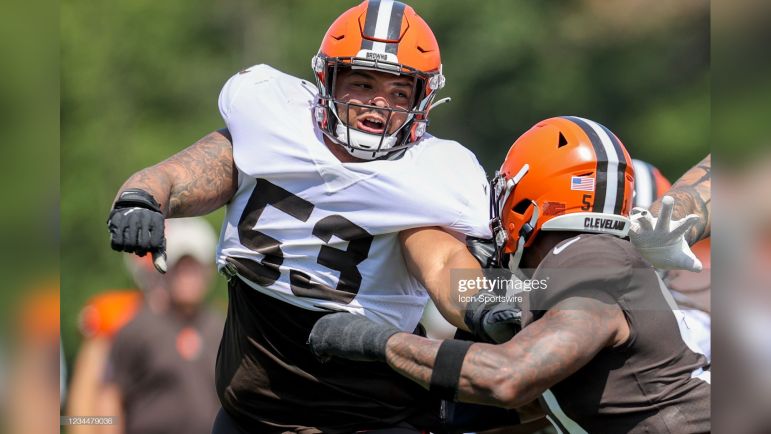 For reasons that remain not entirely clear to me, the Cleveland Browns made the decision this offseason to release veteran center J.C. Tretter, who had given them top-10 play since signing as a free agent a few years ago. Perhaps it was just a matter of cap space. Or perhaps they really believe that much in Nick Harris.

A fifth-round draft pick in 2020, Harris has started a total of two games, logging 214 offensive snaps since coming out of Washington. He only played 68 snaps in 2021 despite dressing for 11 games, all 68 coming in the Week 16 loss to the Green Bay Packers, which he started when Tretter was out due to COVID-19.

With Tretter now gone—still unsigned since being released last month—Harris is set to take over in the starting lineup in the center of what has been one of the best interior offensive lines in the league, with Joel Bitonio at left guard and Wyatt Teller at right guard. The Browns appear to believe he is ready. And so does he.

“I’ve been here for two years and I was like, ‘Well, it’s time’”, the third-year center recently told the team’s website about the prospects of moving into the starting lineup. “I was just ready. I was like, ‘Let’s do it.’ I just wanted to portray myself as a professional and just do my job”.

Harris was a four-year starter at Washington, beginning as a true freshman, where he played guard for his first two seasons before moving to center. He was All-Pac-12 during his final two collegiate seasons, and was considered an early candidate for the Rimington Trophy entering his final year.

He told the Browns’ website that he felt comfortable, that he belonged, while anchoring the line against the Packers last season. But he never took the waiting for an opportunity to heart, instead utilizing that time to grow.

Cleveland isn’t going to hand him a starting job, though. They did sign veteran Ethan Pocic in free agency, a former second-round pick with 40 career starts. They could also potentially select a center in the draft, though their acquisition of Deshaun Watson drained them of their most premium draft capital. Still, Harris may be the favorite. He seems to have Tretter’s vote, having told Harris that he could reach out anytime.

“Just hearing him say that showed me he knew how he helped me, and we understood our relationship”, Harris said of that communication. “He’s a consummate pro, and it felt good for him to be like, ‘If you ever need anything, reach out’”.

The rest of the Browns’ line figures to remain intact, with Jedrick Wills Jr. at left tackle and Jack Conklin at right tackle. They have had one of the better offensive lines in the league the past two years, and they’ll have to keep it that way to protect their $230 million investment.