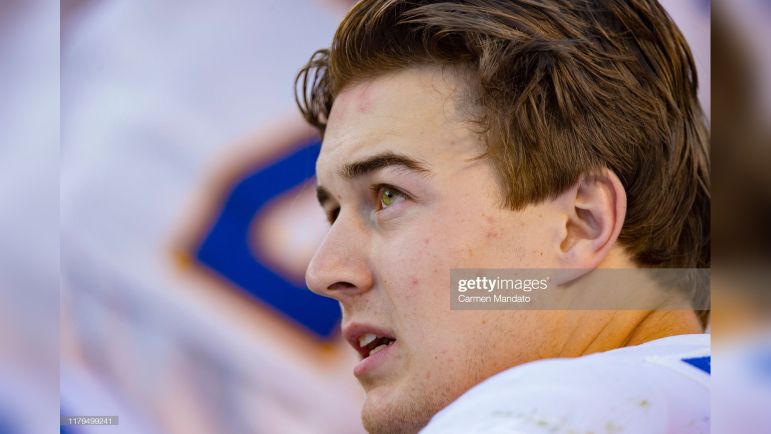 The quarterback position is such that, if you do not have a quality starter, you will struggle to function at a competitive level in today’s NFL. The sheer magnitude of the job has raised the commodity price of quarterbacks through the roof, with salaries now hitting $50 million a year, and that price will only rise.

The search for a quarterback is a perpetual one until you find an answer, which means that you have to keep swinging until you get a hit. In terms of the draft, that usually means that teams make aggressive trades up for the top prospects.

Back in 1997, Jim Druckenmiller was the only quarterback to go in the first round, taken 26th overall by the San Francisco 49ers. He completed 21 of 52 career pass attempts for 239 yards with one touchdown and four interceptions. Jake Plummer, drafted 42nd overall, was far and away the most successful quarterback of the class with a 69-67 all-time record and nearly 30,000 yards thrown, with 161 touchdowns and a complementary interception for each score.

Yet that’s a far sight better than the 2013 class, which stands as the worst in some time. E.J. Manuel was the only first-round pick, going to the Buffalo Bills. He started all of 10 games and hasn’t played since 2017. Geno Smith and Mike Glennon, taken in the second and third rounds, respectively, are the most notable quarterbacks of that class, and neither held a candle to Plummer. They are the only remaining active quarterbacks from the class and have long been backups.

Will the 2022 class hold a different fate? Pickett, at least, seems to have a guaranteed shot at being a starter in Pittsburgh. Where will Malik Willis land? He has an incredibly low floor, but the highest ceiling of the entire quarterback class. Desmond Ridder, Sam Howell, Matt Corral, and Carson Strong have been identified as the remaining top quarterback prospects.

The 2020 draft class has already born fruit with Joe Burrow, Justin Herbert, and Tua Tagovailoa all starters, though the latter tenuously. It remains to see what the future holds for Jalen Hurts and, eventually, Jordan Love.

Outside of Kyler Murray, the 2019 class has proven somewhat underwhelming in hindsight, with the New York Giants just passing on Daniel Jones’ option. Most of the other quarterbacks have already been moved. 2018 gave us Josh Allen and Lamar Jackson, though also Josh Rosen and Sam Darnold, with Baker Mayfield somewhere in between.

Where will this class fall, and Pickett within it? The Steelers need only to have gotten their own selection right, of course. As long as Pickett works out for them, they need not concern themselves with the successes or failures of Willis and company.

The initial impression of this quarterback class from the NFL is clearly a poor one, given the first-round reception. It will be years before they’re right. But with multiple quarterbacks changing teams this offseason and options like Mayfield and Jimmy Garoppolo available via trade, that could have also influenced teams’ decision in what is one of the most open classes in years.