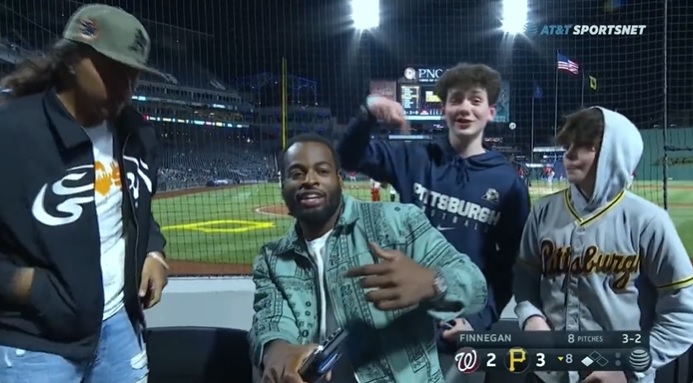 This post will probably come off akin to Chris Farley interviewing Paul McCartney. Remember this thing Najee Harris did? Man, that was awesome.

But Saturday night at PNC Park, Harris again showed why he’s quickly become a massive fan favorite. Harris took in the Pirates tonight to watch them beat up on the Washington Nationals. Sitting near home plate, he made some friends along the way, a couple of younger Steelers’ fans getting to hang out with the Steelers’ starting running back.

Here’s another angle that captured Harris on-camera with some other Bucco fans.

These little kids are having the time of their life with Najee Harris of the Steelers. Seems like a good dude. Love to see it pic.twitter.com/f1zwP5PQD3

The Pirates’ account got in on the fun, too.

And Harris gave a post-game shout.

Harris got to watch a show too and some post-game fireworks. The scrappy Buccos pulled away in the later innings to beat the Nationals 6-4, moving to 4-4 on the young season.

Harris’ fun personality has been evident since the team drafted him last April. He’s proven to be candid, honest, funny, and always in a good mood. His on-field success as the team’s starting running back hasn’t hurt his standing with fans either. Though the numbers didn’t always show it, Harris had a strong rookie season behind a new and patchwork offensive line, coming up largest in the team’s Week 17 win over the Cleveland Browns, the final home game of Ben Roethlisberger’s Hall of Fame career.

The odds of Harris having a long, ten-year career in Pittsburgh aren’t terribly great. That’s just the nature of the position. But he’ll likely be among the most likable Steelers the rest of his career. Which hopefully extends beyond his rookie contract.