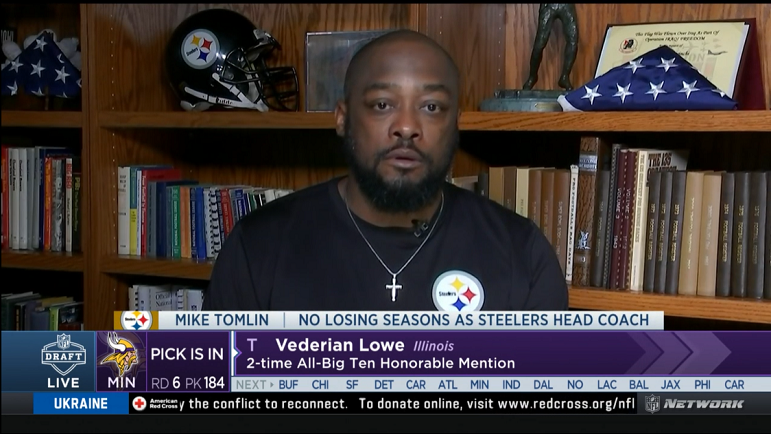 With some concerns along the defensive line moving forward, at least from a depth and age perspective, the Pittsburgh Steelers landed one of the more exciting defensive linemen in the class in Texas A&M standout DeMarvin Leal.

Leal, who was an All-American in 2020 and 2021 in the SEC, was once projected as a top 10 pick heading into the 2021 season before sliding down the board due to limited production, eventually landing in the lap of the Steelers and head coach Mike Tomlin.

Appearing on NFL Network’s draft coverage Saturday, Tomlin couldn’t hide his excitement for the newest defensive linemen in Pittsburgh, praising Leal for his talent and work ethic, adding that he’s still raw, and saying he has a bright future overall.

Watch No. DeMarvin Leal No. 8 on this play. You will not be disappointed with the hustle. #Steelers #NFL pic.twitter.com/blQQg8mHay

“Man, we’re so excited about this young man in this talent level,” Tomlin said to the NFL Network crew of Rich Eisen, Peter Schrager, Charles Davis and Daniel Jeremiah, according to video via NFL.com. “He’s experienced and young being the third-year junior that’s played quite a bit. He’s excelled at, really, the highest stage that you could excel at in college football, playing in that division, in that conference that he played in. He was all-conference. He was an All-American. I thought he represented himself extremely well in some Sunday-like matchup.

“I watched a lot of the Alabama matchup, for instance,” Tomlin added. “But all of those things being said, we still feel like he’s somewhat raw. He has a ways to go from a developmental standpoint and that’s something that we covered here in Pittsburgh. We’re excited about being a part of his growth process and getting them in with those others, and with Coach [Karl] Dunbar and just seeing where the road leads him. He’s got a great deal of talent. He’s a solid young man. That’s the type of guy you want to add to your program, certainly.”

"God's Timing is going to be unbelievable."

Leal certainly checks a lot of boxes for the Steelers, including his work ethic, performance in big matches, and his character overall, all three of which Tomlin praised profusely on NFL Network.

It’s hard to overlook how thrilled not only Tomlin was Saturday, but defensive coordinator Teryl Austin was Friday night regarding the selection of Leal. If the Steelers are able to unlock his potential on a consistent basis, the Steelers will have found themselves a serious steal along the defensive line for years to come.