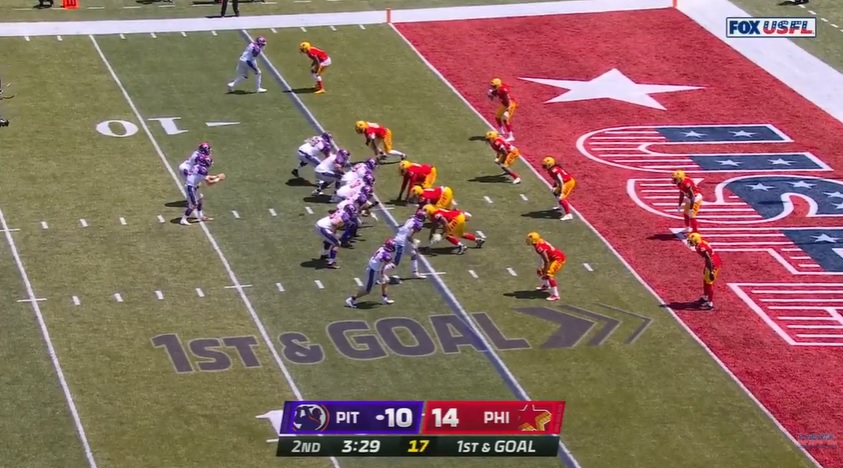 The Pittsburgh Maulers put up points but not wins in their second game of the USFL season, falling to rival Philadelphia Stars 30-23 Saturday afternoon in Birmingham, Alabama.

For the Maulers, they found the end zone for the first times of the year after being held to just a field goal in their opening loss to the Tampa Bay Bandits this past Monday. Pittsburgh’s first touchdown celebration came defensively via a Jaylon McClain-Sapp scoop-and-score touchdown. Lineman Carlo Kemp sacked Star quarterback Bryan Scott with JMS picking the ball up and racing into the end zone 79 yards the other way.

It was his second impact-play of the half, starting things off with an impressive one-handed interception down the left sideline earlier in the day.

To kick off the game, after an early Maulers’ field goal, Philadelphia found the end zone on back-to-back drives. To start the second quarter, the Stars went on a nine-play, 75-yard drive with Scott finding WR Diondre Overton in the end zone on 2nd goal from the three. Following a Josh Love interception, Scott took it in himself from one-yard out on a sneak over left end, giving Philadelphia a 14-3 lead prior to McClain-Sapp’s touchdown. That score made it a 14-10 game.

Pittsburgh’s first offensive score came late in the first half. Love hit TE Hunter Thedford from five yards out to put the Maulers on top 17-14. It capped off an eight-play, 76 yard drive. But Philadelphia answered back before the half with their third touchdown of the day when Scott threw his second TD, connecting with WR Maurice Alexander Jr. from the Maulers’ 20.

After trading punts to start the second half, Pittsburgh again took the lead. A healthy mix of the run and pass game, including a 15-yard run by burly RB Garrett Groshek on 2nd and 14, set up the long ball with Love finding WR Bailey Gaither for a 37 yard touchdown deep down the right side.

WE TAKE THE LEAD 😤

Gaither finished the day as the team’s leading receiver, catching seven passes for 117 yards and that score.

Philadelphia regained the lead for good in the fourth quarter, ending a quick five-play, 66-yard drive with Alexander’s second touchdown of the day, scoring from ten yards out. It set up the first three-point conversion in football history, making it a seven-point game, 30-23.

USFL rules allow teams to kick a normal extra point, go for a two-point try from the two-yard line or attempt a three-point conversion from the ten. An extra element of strategy that paid off for Philadelphia.

The Maulers attempted a late-fourth quarter drive to tie the game, even converting on 4th and 10 with under two minutes to go. But shortly after crossing into Stars’ territory, Love was intercepted by DB Channing Stribling on a pass that bounced into the air, ending the game.

While it’s a tough loss, the Maulers’ offense showed signs of life it didn’t display in their rescheduled Week One opener. The running game averaged a healthy 4.4 YPC while Love, the only Pittsburgh QB to play today, moved the ball much more effectively than in Monday’s defeat.

Pittsburgh moves to 0-2 on the year while the Stars notch their first victory to move to 1-1. Pittsburgh will take on the Michigan Panthers next Saturday at 2:30 PM.