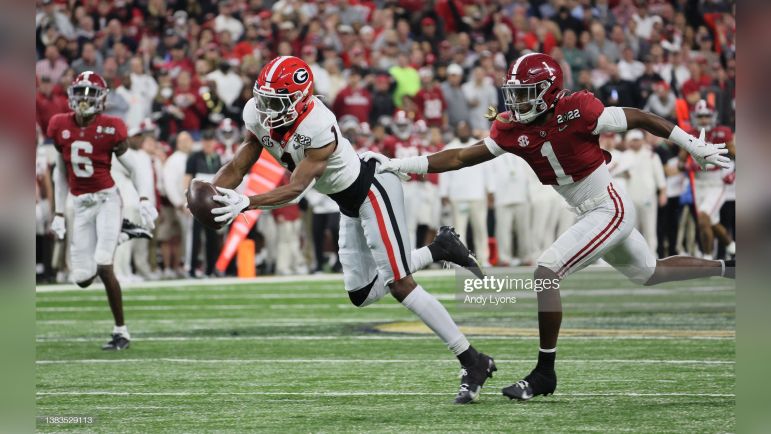 The Pittsburgh Steelers used their second-round draft pick to select Georgia wide receiver George Pickens, who just so happens to be the player I was hoping would be their second-round pick. He joins Diontae Johnson and Chase Claypool as the team’s top three wide receivers for new quarterback Kenny Pickett, whom they drafted last night.

Steelers president Art Rooney II singled out the wide receiver as a position that the team hoped to address today, and they didn’t waste much time doing that, which should be no surprise after the team lost three players at the position in free agency in JuJu Smith-Schuster, James Washington, and Ray-Ray McCloud.

Smith-Schuster already missed most of the past season, so the team already has a pretty good idea of what the offense looks like with Johnson and Claypool functioning as the top two targets with no solid number three. Pickens coming in completely changes that dynamic.

“Diontae and Chase have spoken for themselves”, offensive coordinator Matt Canada said shortly after the selection of Pickens. “I think when you have two guys like that, one more explosive receiver doesn’t really allow anybody to double team. They’ve got to pick who they want to double”.

Johnson has become the Steelers’ volume receiver rover the past two seasons, recording his first 100-catch season last year. Claypool has been used as more of a downfield target. Pickens can come in and sort of do both, arguably having a more complete skill set than either, though not as polished in the fundamentals—aside from ball security—as is Johnson.

Certainly, the Steelers got in the Georgia wideout a player who should be able to contribute on day one, which I’m guessing is something that they were intending to do, as their alternatives were Gunner Olszewski, Miles Boykin, Anthony Miller, and Steven Sims. And defenses will have to account for all three of them.

“I think it allows us to have great versatility in our offense”, Canada said of adding another dynamic wide receiver. “You know, you can’t double them all. I don’t know exactly how that’s gonna work, not gonna get into that yet, but I think it’s a great asset for us. I really do”.

Of course, he’ll have to prove that first, but if he is the sort of player they think he is, it will be a boon to the entire offense, and everybody within it. second-year tight end Pat Freiermuth and running back Najee Harris will also help power this offense as they transition to the next era in the post-Roethlisberger period.