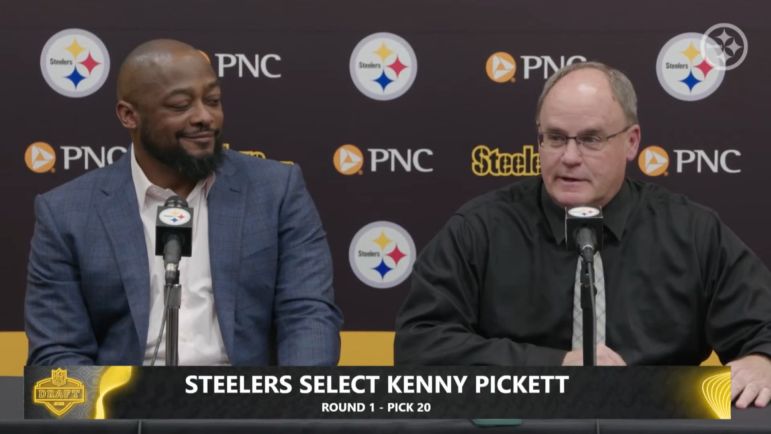 Even though the quarterback class of 2022 was pretty widely regarded as being one of the weakest in a number of years—it was the first class in decades since the first quarterback wasn’t taken until 20 or later—the Pittsburgh Steelers were the team hungriest for the market. Accordingly, they had their anxiety about how the board would play out for them.

The team, of course, was looking to replace Ben Roethlisberger, retiring after they drafted him 11th overall in the 2004 NFL Draft. His heir apparent has been found, locally, in the former of Pitt’s Kenny Pickett, their first-round selection last night.

The Steelers were thrilled to get him, and the fact that no other quarterback was taken and they still drafted him speaks to that. Yet general manager Kevin Colbert wasn’t even sure if they would have a quarterback to choose.

“Honestly, I didn’t know if any of them would make it to us at 20”, he told reporters last night when he was asked for his thoughts on why no quarterback was taken before they took one (and none have been taken since). “But they were there, and again, Kenny was the pick”.

Still on the board are Malik Willis, Sam Howell, Desmond Ridder, Matt Corral, and Carson Strong, the next five quarterbacks everybody seems to think represents the best of this draft class. Yet the relative lack of interest in the position reflects the overall impression that it’s a weak class as a whole. Still, you only need to be right about the selection you make.

If they were so convinced that Pickett was their guy, though, then why did they risk him being taken, especially amid a flurry of trades by teams who could have conceivably had an interest in drafting a quarterback? Did they pursue the possibility of making a trade up?

Surely the fact that the quarterbacks weren’t moving was a factor in their decision not to pull the trigger on a trade. Perhaps if the Panthers, Saints, Falcons, or Eagles were to have drafted Willis or Ridder, they would have felt more pressure to move up.

But they didn’t. They were willing to sit and wait, as they have been almost every year under head coach Mike Tomlin with the exception of 2019 when they moved up aggressively to draft Devin Bush. I’m certainly happier with Pickett at 20 than Bush at 10 minus second- and third-round picks.