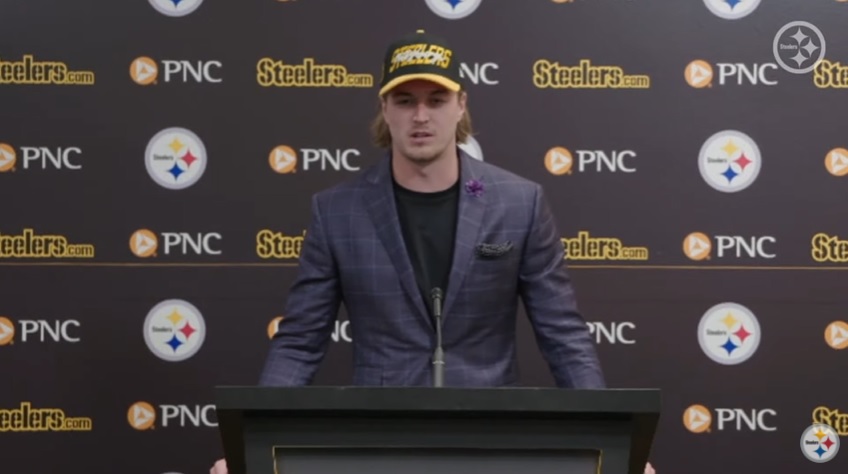 After years of being an older team overall on both sides of the football, the Pittsburgh Steelers are transitioning to a younger demographic, especially on offense.

The selection of quarterback Kenny Pickett in the first round of the 2022 NFL Draft Thursday night in Las Vegas seemingly completed that youth movement, at least at the most important position.

With Pickett in the fold at 24 years of age, the Steelers now have an offensive nucleus that’s all around the same age range with running back Najee Harris (24), Diontae Johnson (25), Chase Claypool (23), and Pat Freiermuth (23), not to mention the average age of the projected starting offensive line of Dan Moore Jr., Kevin Dotson, Mason Cole, James Daniels, and Chukwuma Okorafor being 24.4 years.

Speaking with reporters Friday from Heinz Field for his introductory press conference with the Steelers, Pickett cited the long list of great players in Pittsburgh that he’s looking forward to meeting and learning about, which will hopefully allow him to hit the ground running in minicamp, training camp and potentially even the regular season.

“It’s really exciting,” Pickett said to reporters regarding joining a young, talented corps of offensive players on the Steelers, according to video via the Steelers’ official YouTube page. “There’s a long list of great players here. I’m excited to get involved, meet those guys, learn what they do well and try and win a championship here.”

Pickett should have at least a bit of familiarity with the players offensively, at least the ones who have been around for a bit, having shared the same facility with them the last few years. Add in the fact that he’s watched them up close and personal throughout the last few seasons as a general fan of the Steelers while being part of the city, the learning curve shouldn’t be that steep, at least in terms of familiarizing himself.

How well that helps him hit the ground running remains to be seen, but it’s refreshing to see so much enthusiasm from Pickett, who is very grateful for the opportunity to remain in the Steel City for the foreseeable future.