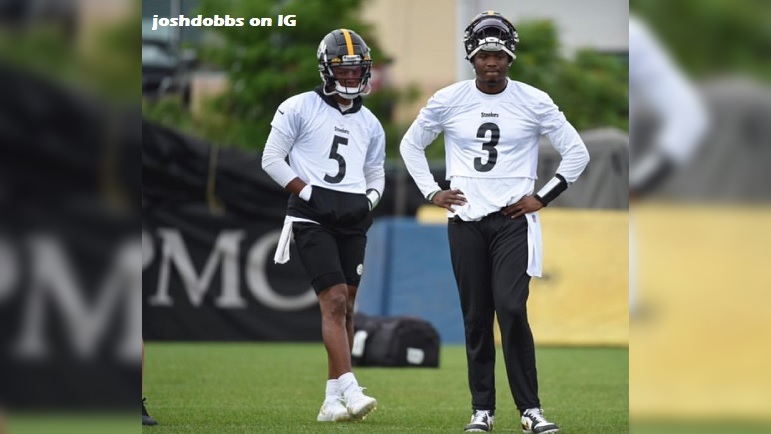 Josh Dobbs was initially invited for a weekend Sirius Interview to talk about the excitement of signing with the Cleveland Browns and competing for a 53-man roster spot. But following Saturday morning’s tragic news of Dwayne Haskins’ death, Dobbs spoke at length about the person Haskins was and what he meant to Dobbs and the Steelers’ locker room.

“Dwayne was a tremendous young man,” Dobbs told the show. “As you said, the news yesterday really, really took the sports world tough and especially by his teammates.”

Haskins was killed after being struck by a vehicle while reportedly attempting to cross a Florida highway Saturday morning. An investigation into his death remains ongoing.

Dobbs revealed the extent of their friendship went further back than spending the 2021 season together on the Steelers’ roster, and that growing up, Dobbs served as one of Haskins’ mentors.

“For me, I was Dwayne’s counselor actually when I was in college and he was in high school at Elite 11. So I saw when he committed to Maryland at the time. We’ve been pretty close really since that point. It’s been tremendous just to see his growth and maturation not only as a player, but also a person on and off the field from meeting him when he was 18 to then being his teammate when he was 24. He came a long way.”

A four-star recruit, Haskins initially committed to Maryland coming out of high school but switched to Ohio State after then-Terps head coach Randy Edsall was fired. At Ohio State, Haskins had a 2018 season for the record books, throwing 50 touchdowns while leading the Buckeyes to a 13-1 season. He was named the 2019 Rose Bowl MVP, throwing three touchdowns in the victory.

“He was a tremendous talent. I think Ben Ben quoted it best. He could throw a football through a car wash and the ball wouldn’t even get wet. He could swing it.”

That talent made him the 15th pick of the 2019 NFL Draft, spending his last 1.5 years with Washington before being released. Pittsburgh signed him after the 2020 season, and Haskins was working on rebuilding his career in a lower-pressure environment like the one the Steelers offered.

For Dobbs, what he’ll remember most isn’t the arm strength. It’ll be the type of person and man Haskins was.

“As you see with everyone’s [social media posts], his energy was infectious. He always had a smile on his face. He always was positive around his teammates, hyping them up, and really wanting to see everyone else succeed around him. Not only other players but other quarterbacks. I thought that was what impressed me so much. The quarterback world, obviously only one person plays, but with his energy, he always wanted to see other people succeed. Whether you were in the same room room with him or if you were across the field from him.”

Dobbs was clearly impacted by the friendship he had with Haskins. Along with everyone else who knew him, Dobbs will carry around a heavy heart for a long time.

It’s been a day…. My prayers go out to the Haskins Family. We are all stunned by the lose of Dwayne. Rest Easy Simba. It was an honor to call you a friend and teammate. 🦁 pic.twitter.com/QZXxdCDKF5