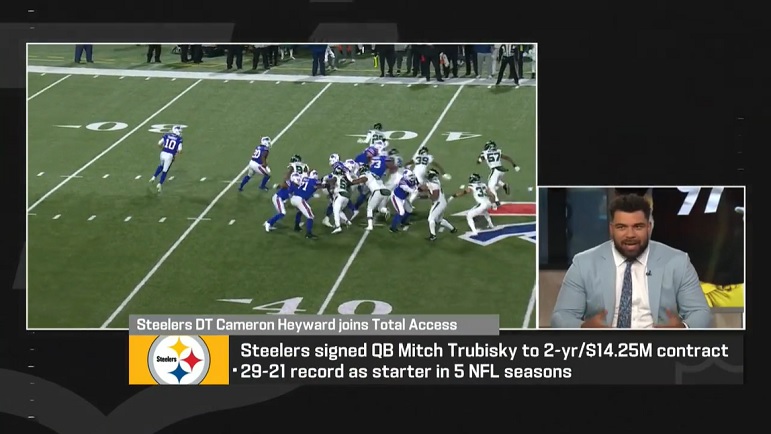 Going from Ben Roethlisberger to Mitch Trubisky is a night and day difference. And while Cam Heyward isn’t saying Trubisky will be the better option, few understand Roethlisberger’s value like he does, Heyward understands Trubisky fits the NFL’s changing landscape.

Heyward joined NFL Network as part of his broadcast boot camp and was asked about Trubisky’s addition.

“Very big shoes,” Heyward told Total Access of Trubisky filling in for Roethlisberger. “Mitch is a very different player than we’ve had. Of course, he’s very mobile and he’s able to move around the pocket. Ben was able to move at a younger age, not anymore. I’m sorry, Ben. These are different times. Yeah. And Mitch can get on the run and complete intermediate passes and he’s gonna be really good in the RPO game as well.”

Trubisky is a solid athlete who ran a a solid 4.67 coming out of North Carolina. Ben Roethlisberger’s probably never run that fast, even back before his knees were shot. All season, Steelers’ coaches talked about the asset QB mobility brings to the game. From QBs salvaging bad plays to how it changes the way a defense can scheme things. Trubisky should fit the overall identity of the Matt Canada offense, one that is under center more than most and asks its quarterback to execute plenty of takes and boots. All things Roethlisberger struggled to do in 2021.

But the Steelers were also a heavy-RPO offense last season, one reason why Roethlisberger led the league in snap-to-throw times. RPOs should be something in Trubisky’s wheelhouse while also offering a more vertical passing attack, an aspect of the Steelers’ offense that was non-existent a year ago.

As Heyward points out, mobility means a lot more to quarterbacks than it used to. It’s a trickle-up from the college game where offenses are spread out and quarterbacks have become a weapon in the designed run game, especially the usage of read-option plays over the last decade. Most of the top quarterbacks in the NFL bring some degree of mobility. And should the Steelers draft a franchise arm, they’ll likely be mobile too. The top names in the class ranging from Malik Willis to Kenny Pickett to Sam Howell, are all able to use their legs.

“When I came to the Pittsburgh Steelers it wasn’t just I was a part of history. I was joining Mike Tomlin, the best NFL coach to me.”@Steelers DT @CamHeyward is in studio to talk about Tomlin, and what defines him as a player pic.twitter.com/pl6MItpJKt