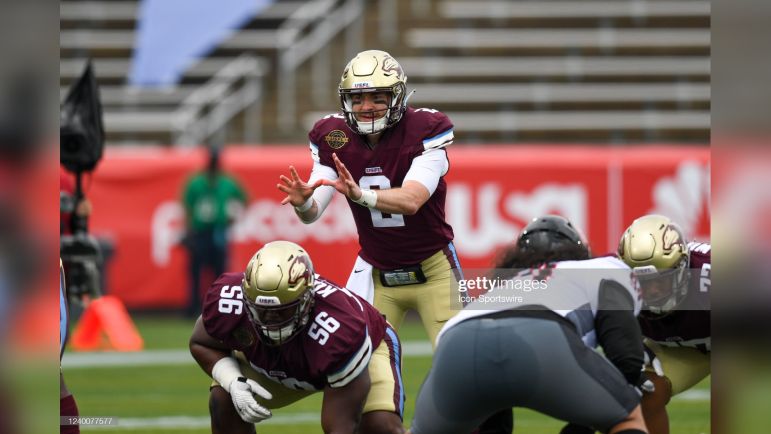 Shea Patterson may be a Michigan man—he played for the Wolverines in college, and he is currently quarterbacking Jeff Fisher’s Michigan Panthers in the USFL—but he grew up an Ohio boy. This past weekend, his hometown roots showed a bit, perhaps, in paying tribute to former Buckeyes quarterback Dwayne Haskins, who tragically lost his life on a Florida highway earlier this month. He wrote ‘Simba’, Haskins’ nickname, on his wristband during his team’s debut.

The connection, though, is actually much deeper. Haskins told the Toledo Blade back in 2018 before a Michigan-Ohio State game that he and Patterson had known each other since eighth grade after playing in an all-star game together. And that was not without controversy, given their college rivalry.

Haskins even said that he asked Patterson for some pointers on Michigan’s defense. “It’s not like we sat down and broke the defense down for 20 minutes”, Patterson said. “He asked me one or two questions, and as a friend, I gave him an answer. I didn’t think it was a big deal. But any time you give information away to another team, especially one you’re playing in the next few weeks, I don’t know if it’s the best look. But from what it actually was, it wasn’t a very big deal”.

Haskins decidedly got the better of Patterson in that game in 2018, throwing for nearly 400 yards with six touchdowns. Patterson did toss three touchdowns, but also an interception, and was held to under 200 yards. It was the only time the two would play against one another, as Haskins declared for the draft soon after, and Patterson only spent portions of the 2020 offseason in the NFL, never even making it to a training camp.

He went on to play in the CFL in 2021, only seeing a situational role in a handful of games with the Montreal Alouettes, before being let go after the year. But he was the first overall pick in the USFL’s draft, taken by Jeff Fisher as the Panthers’ head coach.

The Panthers did lose their opening game to the Houston Gamblers, with Patterson completing 17 of 25 pass attempts for 192 yards with one touchdown. His backup, none other than Paxton Lynch, managed to throw an interception and fumble on a scramble, completing two of five pass attempts for an entire yard.

Haskins, of course, had been with the Steelers since January of 2021 after signing a Reserve/Future contract. He served as the number three quarterback that season behind Ben Roethlisberger and Mason Rudolph, and was hoping to compete for a starting role this year.

He was down in Florida in order to train with teammates, an impromptu workout organized by new quarterback Mitch Trubisky, when he was killed. The circumstances of his death—namely, why he was on foot on a highway—remain under investigation.