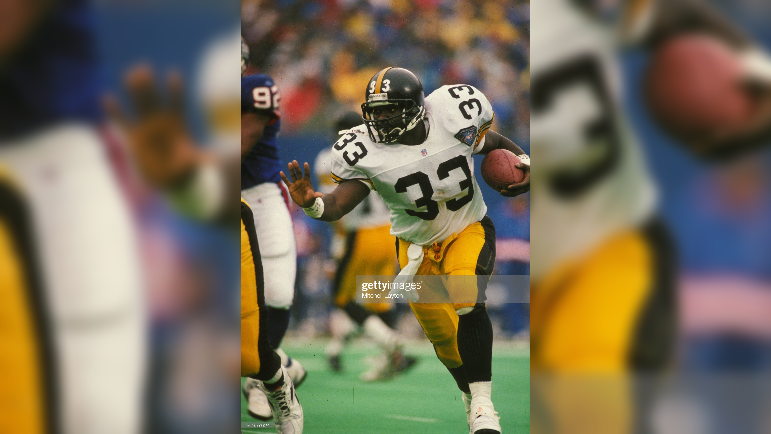 When Foster went down with an injury on his first carry in October 1994 in Week 7 against the Cincinnati Bengals, it would have been understandable if there was some doom and gloom surrounding the Steelers’ offense, especially in the ground game.

In stepped rookie third-round draft pick Byron “Bam” Morris into the starting lineup, and in typical Steelers fashion, Morris ran roughshod all over the New York Giants in Week 8 on October 23, 1994 at Giants Stadium, racking up 146 yards and a touchdown on 29 carries, leading the Steelers to a hard-fought 10-6 win in a sloppy game overall from all parties involved.

Without Foster in the lineup, the Steelers stayed run-heavy against at tough Giants’ front seven featuring Michael Strahan, Jessie Armstead, Keith Hamilton, and Michael Brooks, utilizing Morris heavily in his first career start in the NFL.

Things didn’t start out well for Morris in his first career start as a rookie at Giants Stadium, as on his third carry of the game Morris fumbled the football away, which led to a 19-yard field goal from Giants kicker David Treadwell, giving New York a 3-0 lead.

Despite the struggles with ball security, Steelers’ head coach Bill Cowher didn’t pull the rookie from the lineup, instead feeding him more, ultimately resulting in a breakout game for the rookie.

Following an 8-yard run to open the Steelers’ drive midway through the second quarter, Morris followed up with a lumbering 5-yard run to move the chains and spark the Steelers’ offense, following behind a key block from left guard Duval Love to get on the boundary and roll downhill.

Shortly after the chain-moving run, Morris really came on strong, ripping off a 12-yard run up the middle on an old-school draw from quarterback Neil O’Donnell, giving the Steelers just their second 10+ yard gain of the day in wet, rainy conditions in New York.

One play after the 12-yard run, the Steelers ran the same play for Morris on the delayed draw, which turned into a 16-yard gain, eventually setting up Gary Anderson’s 29-yard field goal, making it a 6-3 game.

Things really slowed down from there between the two teams as the Steelers’ defense turned up the heat on Giants quarterback Dave Brown, sacking him multiple times thanks to Brenton Buckner and Ray Seals before Rod Woodson picked him off early in the fourth quarter.

Woodson’s interception and 25-yard return eventually set up the lone touchdown of the game as Morris capped off the seven-play, 34-yard drive with a 6-yard plunge off right tackle behind fullback John L. Williams, staking the Steelers to a 10-6 lead on the road.

With a four-point lead, the Steelers leaned on their defense down the stretch as a sack by safety Carnell Lake slowed New York’s final drive of the game, giving the football back to Morris and the Steelers.

From there, Morris closed the game out in style.

Following his breakout performance in his first career start on the road, Morris went on to rush for 836 yards and seven touchdowns in his first season in the NFL on just 198 carries, recording just one other 100-yard performance on the year, which came in Week 14 against the Cincinnati Bengals on the road.

In his two seasons in Pittsburgh, Morris rushed for 1,395 yards and 16 touchdowns on 346 carries, bursting onto the scene in a big way overall.