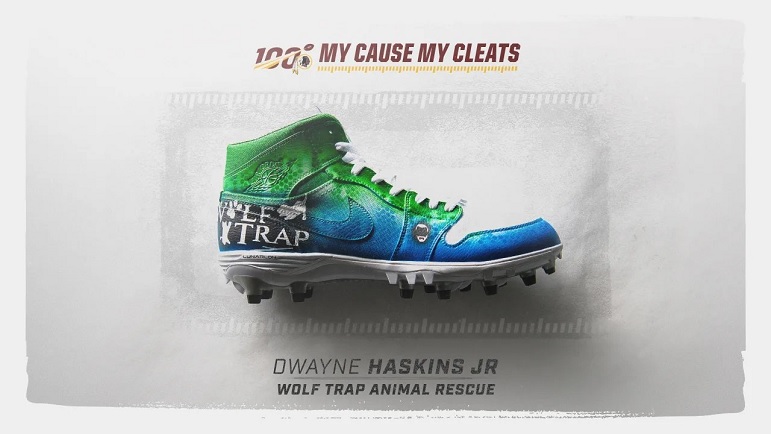 Dwayne Haskins’ death is a tragedy and his life won’t soon be forgotten. And in those tough moments, football fans have found ways to create moments of positivity. In a feature piece written Tuesday by USA Today’s Jori Epstein, the Wolf Trap Animal Rescue, an animal shelter Haskins supported, has received countless donations from fans honoring Haskins’ memory.

“It means a lot and speaks volumes of the person who they are and how giving and caring they are and supportive of their local community,” vet Amber Burton told the paper. “When someone like Dwayne or [Washington safety Troy Apke] or any of these NFL players get involved, it shows the depth of their character. That’s something we won’t ever forget.”

Haskins wore cleats in support of the organization during the “My Cause, My Cleats” week during his rookie season in 2019 when he was with Washington. You can see the pair he wore in the header photo at the top of the article. It’s a week the league has implemented over the past several years, a chance for players to bring awareness to a great cause while showing off creative footwear pre-game.

“Dogs are a man’s best friend,” Haskins said at the time as the reason for choosing WTAR. “We just love spending time with them — they bring a whole bunch of energy — and they make my day brighter.”

During that week, Haskins’ encouraged fans to consider donating a dog from their local shelter.

According to the USA Today article, nearly 300 donations have poured in since Haskins’ death, raising well over $6000, a number far higher than the typical money raised in a month. According to Epstein, donations came all over from, notably from Steelers and Bills’ social media groups, but likely from football fans across the country in Haskins’ memory and to support an incredibly worthy cause.

On its website, the Wolf Trip Animal Rescue outlines its mission with the following statement.

“Wolf Trap Animal Rescue (WTAR) focuses efforts on rescuing high-risk animals from euthanasia, neglect, and abuse. These animals primarily come from Mississippi, where young animals are euthanized by the hundreds each and every day due to overpopulation. Lack of spay-neuter laws and large sections of rural land allow for free-roaming animals to reproduce, leading to a surplus of neglected, homeless, and starving puppies and kittens. These animals are then found and brought to local animal shelters, which simply cannot provide the care or homes these pets need in order to survive. Ultimately, they get euthanized for space or for illnesses contracted at the shelter.”

The surge of donations have come after unimaginable sadness in the football world and to those who knew Haskins. But sports fans have yet again proven the ability to band together and help out however they can.

If you would like to make a donation, you can do so by clicking the link here.