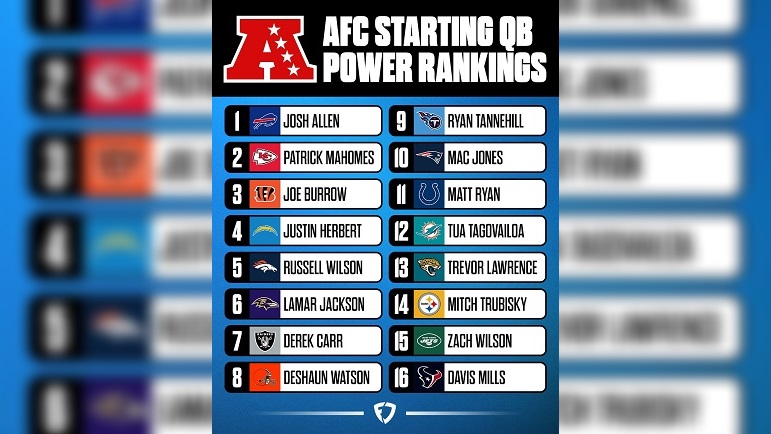 Where does new Pittsburgh Steelers quarterback Mitch Trubisky land in AFC quarterback rankings now that the primary free agency signing period has about come to an end? Well, FanDuel has recently made their attempt to answer that question.

On Tuesday, FanDuel released their AFC quarterback rankings for the 2022 season, and they weren’t kind when it comes to their placement of Trubisky as they have the former second overall pick out of North Carolina slotted as the 14th best quarterback in the conference.

Trubisky’s fall from grace after being the No. 2 overall pick in the 2017 NFL Draft by the Chicago Bears took four seasons in total. After Bears essentially gave up on Trubisky after the 2020 season, the young quarterback landed with the Buffalo Bills on a cheap one-year contract last offseason to serve as the backup to starter Josh Allen. Trubisky barely played with the Bills in 2021.

Despite his super limited playing time in 2021, Trubisky still managed to land a semi-respectable two-year deal with the Steelers during the early stages of this year’s free agency signing period and now the expectations are that he’ll be the team’s starting quarterback to open the 2022 regular season. Even so, the Steelers are still expected to draft a quarterback at the end of this month and possibly even in the first round.

For his NFL career to date, Trubisky is 29-21 as a starter with the Bears and he even had two playoff appearances, both losses, with them as well. While with the Bears, Trubisky was credited with five fourth-quarter comebacks and seven game-winning drives. He had 64 touchdown passes and 37 interceptions while with Chicago for a QB rating of 87.2. In his limited playing time last season with the Bills, Trubisky had one interception on just eight total pass attempts.

Trubisky’s two-year contract with the Steelers makes it super easy for the team to part ways with him after the 2022 season and especially if fails to play well, which is essentially what FanDuel seemingly expects to happen, based on where they have him slotted in their AFC quarterback rankings.

While it is very understandable as to why FanDuel has Trubisky ranked 14th overall in their AFC quarterback rankings, one could make a decent argument that he should be at least a few spots higher.

So, where would you rank Trubisky right now when it comes to the AFC quarterbacks? Is 14th overall the right spot? Let me know in the comments.