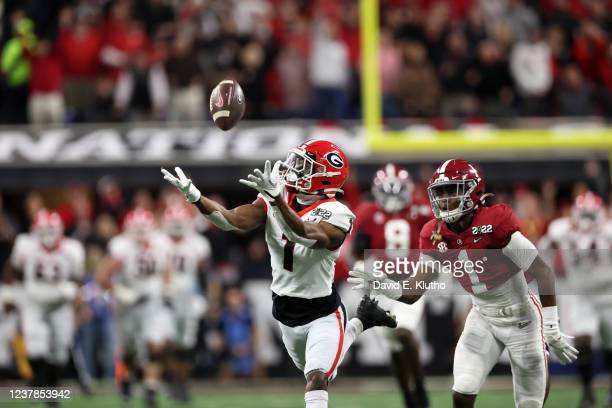 The pick is in. This is Kevin Colbert’s final year as the general manager, and like in past years, we want to evaluate the value of each pick. Based on projections for each player by draft outlets as well as our own reports we want to see if the pick’s value is above or below how they were ranked coming into the draft.

The Steelers lost JuJu Smith-Schuster, Ray-Ray McCloud, and James Washington to free agency, so adding at least one wide receiver in the draft was expected. They showed interest in Pickens in the pre-draft process, having wide receivers Coach Frisman Jackson there to work him out. He suffered an ACL injury that slowed his collegiate progress but some think he will be better as a professional.

Daniel Jeremiah had him ranked at 61st on his Top 150. On the broadcast there were some phrases that stood out when he was referencing Pickens. He mentioned physicality, size and strength. He said he will attack the ball in the air and is a big time blocker in the run game.

Lance Zierlein of NFL.com gave him a second-round projection and compared him to Lions wide receiver Josh Reynolds, profiling Pickens like this:

“Lanky perimeter wideout with exciting ball skills but in desperate need of additional play strength and a clean bill of health. Resilient to make it back so quickly after an ACL tear, but needs to show quick-cutting ability for route-running. Pickens possesses borderline elite ball skills with in-air adjustments, strong hands and an enormous catch radius. However, he fails to put defenders on his hip and command the catch space to make his work less cluttered. The routes need more polish and physicality but he has the athletic ability to become a viable target on all three levels as a likely Day 2 draft pick with a little wider gap between ceiling and floor than NFL teams might like.”

CBS Sports had Pickens ranked number 32 overall and compared him Los Angeles Chargers receiver Keenan Allen, and said this about his positive traits:

“Tall, good-framed outside wideout with athleticism galore. Great combination of suddenness and speed. Always looking to turn an easy comeback into a big gain. Quicks free him on those plays. Knows how to beat press at the line and has the length/quicks combination to become outstanding in that area eventually. Lean on vertical routes helps him separate down the field and plays with reckless abandon when trying to find the football. More of a vertical separator than someone who’ll get open underneath. Snaps out of his breaks at the intermediate level. Huge catch radius and a flair for the highlight-reel grab. A lot to like about his game. Flaws are few and far between.” And for his negatives, “Not a YAC monster. More of a vertical separator than someone who’ll get open underneath. Measured in with disproportionaly small hands at the combine. Torn ACL in 2021 and was limited to only four games and five catches for 107 yards. A touch on a lanky side; physical corners may be able to outmuscle him.”

“Pittsburgh will be needing a receiver that can take the top off the defense in their offense, and while Pickens may be closer to the mold of a Chase Claypool than a Mike Wallace when it comes to play style, I do think that he can effectively play that Z-receiver role that not only can make defenses play him honest as a vertical threat, but also be more consistent at winning the 50/50 ball that Claypool has struggled with up unto this point in his career. The injury status raises questions where Pickens will eventually be selected come April, but should the medical check out, he could present a potential value in the middle rounds of the 2022 NFL Draft.”

Overall, each of these profilers had him ranging from pick number 32 through the end of the second round. Just like pick number one, it looks like the Steelers got a player that they coveted, and again did not have to give up any picks to move up to get him, giving them GOOD value on this pick. He adds size and physicality to the wide receiver room, now giving the Steelers four wide receivers over 6’3”, joining Chase Claypool, Cody White, and Miles Boykin.