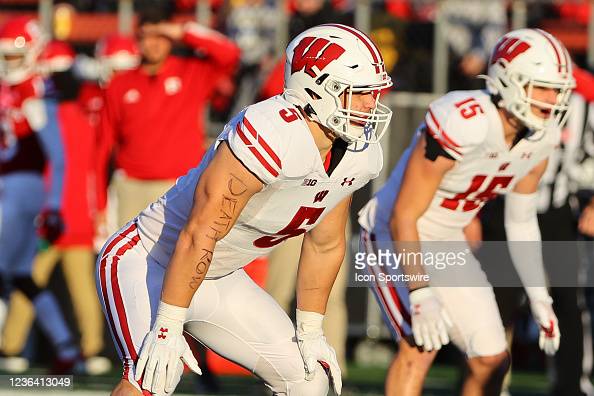 Two days away from finding out who the Pittsburgh Steelers will draft in the first round of the 2022 NFL Draft, ESPN draft analyst Matt Miller decided to drop his final seven-round mock draft Tuesday morning.

In typical Matt Miller fashion, there’s a lot of chaos in the mock draft, especially from the Steelers’ perspective as Miller has the black and gold going defense heavy in the early portion of the draft.

Of course, Miller sticks with the correct line of thinking in the first round by pairing Liberty quarterback Malik Willis with the Steelers at No. 20 overall, giving Pittsburgh a quarterback they’ve clearly coveted the entire pre-draft process without having to deal away future draft capital, which is starting to feel more and more likely as we draw closer to the draft.

“The Steelers’ front office racked up the frequent-flier miles this offseason traveling to nearly every quarterback’s pro day. Here, they could pull the trigger on a talented prospect who can sit and learn behind Mitch Trubisky for a season before being unleashed on the AFC North,” Miller writes regarding the selection of Willis at No. 20 overall. “Willis’ arm strength, running ability and leadership are all perfect for Pittsburgh. He just needs time to develop and learn. This is the perfect situation for both player and team.”

“A quarterback in Round 1 allows the Steelers to get aggressive building up the roster in subsequent rounds,” Miller writes regrind the Woolen selection. “Woolen is a raw cornerback after making the move from wide receiver, but at 6-foot-4 he has 4.26-second speed — traits you can’t coach. His potential as a man-coverage corner is high.”

“Chenal, a throwback linebacker who would have been a starting 3-4 thumper 10 years ago, will beef up the middle of the Pittsburgh defense while offering good pass-rush and blitz skills,” Miller writes of the selection of Chenal for the Steelers. “He might never be a three-down linebacker, but he has value as a potential two-down player who can rush the quarterback in nickel situations.”

Woolen is certainly intriguing with his length and speed, but as we do here at Steelers Depot, we point out the plausibility. Not a single member of the Steelers’ organization met with Woolen at the NFL Scouting Combine, and no Steelers’ front office member, position coach or scout attended his Pro Day.

As for Chenal, there’s certainly interest there as the Steelers met with the Wisconsin standout in Indianapolis at the Combine, while Steelers’ Pro/College scout Dave Petett attended Wisconsin’s Pro Day.

Following the run of defenders in the second and third round for the Steelers in Miller’s mock, the ESPN draft analyst goes offensive in the fourth round, pairing the Steelers with Baylor wide receiver Tyquan Thornton at No. 138 overall, giving Pittsburgh a true burner who was also recruited by current Steelers’ wide receivers coach Frisman Jackson.

In the sixth round at No. 208 overall, Miller pairs the Steelers with TCU offensive tackle Obinna Eze, before then grabbing Iowa State tight end Chase Allen at No. 226 and Miami (OH) safety Sterling Weatherford at No. 241 in the seventh round, rounding out the Steelers’ draft.

Overall it’s a decent mock, one that would look very good on paper, especially if there was interest in Woolen. That said, the later rounds feel rather empty overall, as Eze and Allen profile as more practice squad guys, while there’s a chance Weatherford is asked to change positions at the next level into more of a hybrid linebacker, which he struggled at in Mobile at the Senior Bowl.