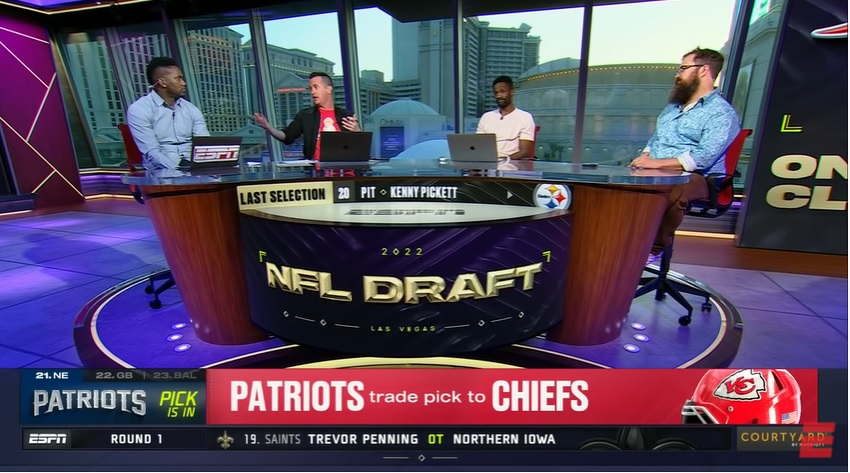 Last night, the calling card of GM Kevin Colbert and company seemed to again work to perfection, as despite reported failed attempts to trade up, they stood pat at pick 20 and allowed their future franchise quarterback, Kenny Pickett, to fall into their lap. The Heisman Trophy finalist was lauded by many as the most pro-ready QB in this class, and was considered by many to be highly in play for Pittsburgh, along with Liberty’s Malik Willis. However, as any draft class goes, there are plenty of critics, especially when it comes to first-rounders. Count ESPN’s Domonique Foxworth amongst them, based on his comments made regarding the pick.

“I mean, they share a facility, so they get their look at [him]. You walk into the Pittsburgh Steeler facility, when you pull up, there’s a big Steelers helmet and there’s a big Pitt Panthers helmet,” Foxworth said, according to the official ESPN YouTube channel. “They literally share a building. They know what they’re getting, and I guess they see more than what we saw.”

He certainly is right in that aspect, as the two teams both share the UPMC Rooney Sports Complex. Coach Tomlin even mentioned of frequent chats with Pickett dating the whole way back to his freshman season, so when Foxworth notes the team has seen more than the public eye has, he’s not lying. With the draft being held in Las Vegas, the panel began discussing Pickett with a Vegas-themed “Real or Replica” segment, citing player comparisons like Derek Carr and Tony Romo and whether they’re substantial. Foxworth then praised Pickett, despite his earlier comments.

“I think he’s real because, I think going to Pittsburgh, he’s set up for success, when it comes to that wide receiver corps, and the skill position players. When you look at Najee Harris, Diontae Johnson, Chase Claypool, Pat Freiermuth, who played at Penn State, he stayed in Pennsylvania as well. Now, if they can just get the offensive line right, I love Kenny Pickett’s pocket movement. I don’t like the way he holds the ball in the pocket too long, at times. And sometimes he can use his athleticism. It can hurt him, because he thinks he’s more athletic than he is, now he’s athletic, but sometimes he can think he’s more athletic than he really is.”

That athleticism at the position was a highly sought after trait that team brass has stated they were looking for in their next QB. Pickett put that on full display at the NFL Combine, where his 4.73 40 time was third-best at the position. And we all remember the infamous “fake-slide” Pickett executed against Wake Forest in the Panthers’ 45-21 ACC Championship victory. On that 58-yard run, Pickett flashed his mobility, as he was pulling away from Demon Deacon defenders prior to “pulling up.” Odds are very good that Tomlin and Colbert will insist on minimizing runs like this at the pro level, but Pickett will add some juice to the position not seen in the Steel City since Kordell “Slash” Stewart.