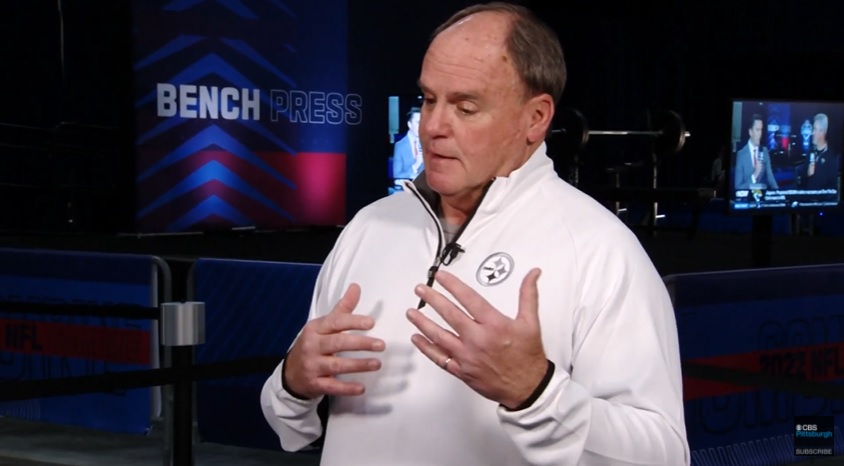 According to a recent study from ESPN, the Pittsburgh Steelers are middle of the pack in the NFL when it comes to teams who get the best or worst value in the NFL Draft.

Based on a study spanning the last 10 drafts, the Steelers ranked No. 16 overall under General Manager Kevin Colbert, edging out the Cleveland Browns and Cincinnati Bengals in the AFC North as the Bengals ranked 27th and the Browns ranked 31st. Unsurprisingly, the Baltimore Ravens were near the top of the league in best value drafted, ranking No. 3 overall in the league.

ESPN’s study was explained like this: “To evaluate the players taken in each of the past 10 NFL drafts (2012-2021), we used Approximate Value (AV) — Pro Football Reference’s method of measuring the performance of every NFL player. We took each player’s career AV and measured it against a value based on where that player was taken in the NFL draft — we’re calling it Career Approximate Value Over Expected (CAVOE).

“For example, players drafted in the first or second rounds have a higher baseline for performance, so if they struggle they will have much lower CAVOE scores than a sixth- or seventh-round pick who made little impact. To get the team ranking, we added up CAVOE scores for all players drafted by teams between 2012 — regardless of how long those players were with the team that drafted them. The idea is to see which teams drafted players who have provided the most value over their NFL careers.”

Seems a bit confusing overall, but here’s a breakdown of the Steelers’ last 10 drafts based on AV and CAVOE. 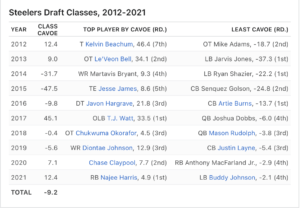 There’s some impressive names in the top player by CAVOE category that Colbert certainly hit on, including seventh-rounder Kelvin Beachum, and guys like defensive tackle Javon Hargrave, Diontae Johnson and Chukwuma Okorafor in the third round in recent drafts. But on the flip side, there’s some major misses, including Jarvis Jones in 2013, Senquez Golson in 2015, and Anthony McFarland in 2020.

What I don’t like about the study is the weight placed on Ryan Shazier and his career being cut short by a spinal injury, which somehow hurt his CAVOE. There should have been a disclaimer in there, or some sort of caveat to remove Shazier from the data, considering when healthy he was one of the best linebackers in football and well on his way to a remarkable career with the Steelers.

It should come as no surprise though that ESPN highlighted the Steelers’ draft class in 2017 as its best of the decade, thanks in large part to the selections of T.J. Watt, JuJu Smith-Schuster, James Conner, and Cameron Sutton, who all have played significant roles in Pittsburgh and produced at respectable levels across the board when on the field, especially Watt, who is the best defender in the game.

“The Steelers nailed the 2017 NFL draft from their first pick when they selected T.J. Watt at No. 30th overall. Watt, the reigning Defensive Player of the Year, turned into a foundational piece of the Steelers’ defense,” ESPN’s Brooke Pryor writes in the study. “After Watt, the Steelers added wide receiver JuJu Smith-Schuster, cornerback Cam Sutton and running back James Conner. While Sutton is the only remaining Steeler of the trio, Smith-Schuster and Conner each made significant contributions during their stints in Pittsburgh.”

While the Steelers typically get good to great value on Days 1 and 2 of the NFL Draft, the study shows that Colbert and the Steelers are lacking on Day 3 where a lot of teams tend to clean up and round out rosters, as Pittsburgh ranks 25th in the league in Day 3 CAVOE at -11.5.